Get revenge on Michelle for killing his family

Edward "Eddie" Sawyer also known as Tex Sawyer is a dangerous cowboy and the main antagonist of the film, Texas Chainsaw Massacre 3.

He is portrayed by Viggo Morestrin who also played Lucifer in The Prophecy and John James Urgayle in G.I. Jane.

He first mets Ryan and Michelle at Last Chance Gas Station, he and Alfredo pretend that they dont know each other.He stops Alfredo from harassing Michelle.

Tex finds Alfredo spying Michelle, he attacks him because of that. Alfredo fakes Tex's death by shooting him with a shotgun. As night falls, Tex jumps in front of Ryan and Michelle, causing them to crash as well another driver named Benny, when Michelle arrives his house, he catches Michelle with the help of his niece, who is the daughter of Leatherface, the two nail and tie Michelle in a chair in the kitchen, Tex's mother arrives as well his brother, Tinker Sawyer dragging badly injured Ryan.

Michelle frees herself from the chair however Tex catches her and Michelle stabs him in the chest with a knife, Tex grabs a hatchet and goes after Benny, the two fought and Benny soaks him with fuel, Benny throws zippo lighter at Tex, burning him alive. 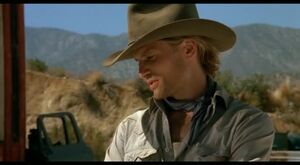 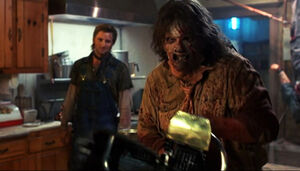 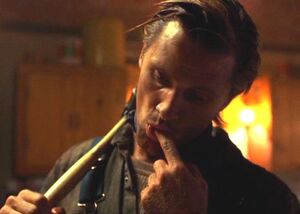 Retrieved from "https://villains.fandom.com/wiki/Tex_Sawyer?oldid=4084358"
Community content is available under CC-BY-SA unless otherwise noted.