High Overseer of the Abbey of the Everyman

Charisma
Connections to the priesthood of the Abbey of the Everyman

Aid Lord Burrows in his plans.

Thaddeus Campbell is a major antagonist in the 2012 video game Dishonored. He is the High Overseer of the Abbey of the Everyman and is the right-hand of Hiram Burrows with whom he plotted the coup against Dunwall's empress Jessamine Kaldwin. Though both manage to blame the Empress' bodyguard Corvo Attano for the murder, Corvo escapes custody and starts hunting down those who wronged him.

He is Corvo's first target and is eliminated in the Abbey's headquarters at Holger Square.

Despite Campbell's high position within the restrictive Abbey of the Everyman, he is known to lead an extremely decadent and deviant lifestyle. The Heart reveals that "He breaks each of the Seven Strictures daily. It is his own private joke." He maintains a secret chamber beneath the Office of the High Overseer that is filled with mattresses and lingerie, plus notes discussing his dealings with the Golden Cat and an audiograph regarding Corvo Attano's escape from Coldridge Prison. He keeps a rune in the room as well, in a protective glass case beside a copy of Litany on the White Cliff. Rumors of Campbell's lifestyle are seemingly known to the population of Dunwall; Samuel Beechworth comments on it himself, saying, "Maybe it's not my place to say, but men of the faith shouldn't live like barons."

Campbell regularly resorts to blackmail to achieve his aims, keeping a journal where he records secrets about a great number of Overseers. Teague Martin claims that it is through blackmail that he was able to ascend to the position of High Overseer.

Campbell is also willing to kill to retain his position; a note in his secret room from Madame Prudence reveals that he has murdered courtesans who have attempted to blackmail him.

In order to eliminate the Lord Regent, the Loyalists decide to eliminate his supporters one by one, starting with Campbell. They send Corvo to Holger Square to infiltrate the Abbey's headquarter and eliminate the High Overseer. Corvo is also tasked with retrieving Campbell's journal, which Martin intends to use to ascend through the ranks of the Abbey. Before Corvo and Samuel take off, Corvo is approached by Callista Curnow, niece of City Watch Officer Geoff Curnow. She states that Campbell is plotting to murder her uncle (due to tensions between the City Watch and the Overseers, and Curnow's aversion to corruption), and begs Corvo to save Curnow.

Once inside the building, Corvo must enter the meeting chamber in order for Campbell and Curnow to arrive. On the table, there are two glasses of wine, one of which has been poisoned by Campbell. Corvo has multiple ways to eliminate Campbell. He can decide to dispose of him lethally or non-lethally.

Corvo can dispose of Campbell with every weapon and skill at his disposal. However, if Campbell has not yet attempted to kill Curnow the captain will rush to Campbells side and attack Corvo.

If Corvo wants to kill Campbell without revealing himself he can do so by switching the poisoned glasses to poison Campbell instead of Curnow. Should Campbell be poisoned he will start coughing and eventually realise what is happening to him. He will fall to the ground in a coughing fit, ordering Curnow to burn the black diary and insulting them before succumbing to the poison. If Corvo poisons Campbell with the wine and remains undetected, Curnow will alert the guards in the next room and be accused of the murder by an Overseer. Curnow and his men will then fight him and run from the room as the alarm and lockdown are activated and the Overseers pursue him. He is usually able to escape, but Corvo may have to assist in the captain's retreat in order to keep him safe.

Corvo can also shatter both glasses, causing Campbell to invite Curnow into his hidden room to dispose of the captain there silently. Once inside the room, Campbell will distract Curnow, then draw his sword and attempt to stab Curnow in the back. Corvo can alarm Curnow by either shooting Campbell with a sleeping dart or shooting him into the foot with a crossbow bolt or by shutting off the audiograph that is playing music. This will cause Curnow to turn around and defend himself against Campbell.  This will cause Curnow to realise Campbell's intentions and he will attack and kill the High Overseer. After Campbell's death, Curnow approaches Corvo and thanks him, stating that while being supposed to arrest Corvo he won't do so. Curnow will then flee Holger Square.If Corvo intervenes before Campbell approaches Curnow with his sword, Curnow will not see Campbell's attempt on his life and will become hostile.

If Corvo chooses to brand Campbell, public announcements in the next mission will state that Campbell has been expelled from the Abbey and that providing aid to the former High Overseer is a crime. Campbell will then appear in The Flooded District mission as a weeper. A note can be found next to him in which he laments how things turned out for him in the end. He also curses Corvo in the letter, blaming him for everything. 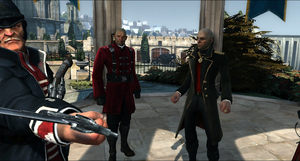 Burrows and Campbell blame Corvo for the murder 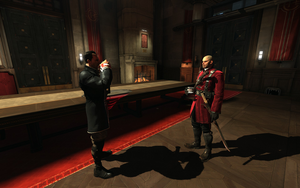 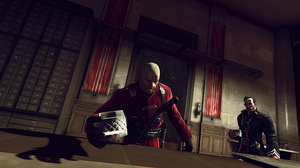 Campbell dies from the poison 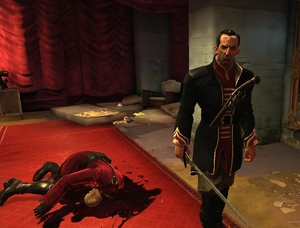 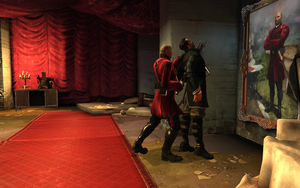 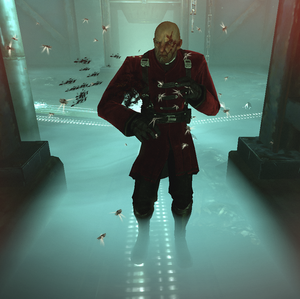 Campbell as a weeper