Leading a cult of robbers

Thaddeus E. Klang is an antagonist in the Disney animated series TaleSpin, appearing in the two-part episode "For Whom the Bell Klangs", as the main antagonist.

He was voiced by Tim Curry, who also played General Von Talon in Valiant, Hexxus in FernGully: The Last Rainforest, Pennywise/IT in It, Drake in The Pebble and the Penguin, El Malefico in Mucha Lucha!: The Return of El Malefico, Dr. Frank-N-Furter in The Rocky Horror Picture Show, Big Bayou in Courage the Cowardly Dog, Maestro Forte in Beauty and the Beast: The Enchanted Christmas, Ben Ravencroft in Scooby-Doo and the Witch's Ghost, The Goblin King in Scooby-Doo and the Goblin King, King Chicken in Duckman, Mouse King in Barbie in the Mouse King, Lord of Darkness in Legend, Long John Silver in Muppet Treasure Island, Darth Sidious in Star Wars: The Clone Wars, Farley Claymore in The Shadow, Wadsworth in Clue, Anatoly Cherdenko in Command and Conquer: Red Alert 3, Big Brother in Johnny Bravo, Dr. Slicer in Recess, Cardinal Richelieu in The Three Musketeers, Billy Flynn in Criminal Minds, Professor Calamitous in The Adventures of Jimmy Neutron: Boy Genius, Kilokahn in Super Human Samurai Syber-Squad, Belial in The Legend of Atlantis, and Evil Manta in The Little Mermaid.

Klang is the egocentric and manipulative leader of the cult-like organization seeking the secret weapon hidden in the lost city of Tinabula. He is a green cobra with a black cloak, warlock-like hat, metallic jaw (capable of crushing hard objects with his bite), metallic limbs, and speaks with a metallic echo to his voice (the abundance of metal being the basis for his name).

Klang learned of an archeologist named Katie Dodd, who was working on uncovering the lost city of Tinabula. Evidently, Klang had heard of the legend of Tinabula, that somewhere within the ancient city was a weapon that could destroy anything with sound waves. Enticed by the awesome power this legend suggested, Klang traveled to the deserts outside Ghafia to "persuade" Ms. Dodd to find the weapon for him.

Aware that his interference could stir up trouble with the local authorities, Klang surrounded himself with red-robed desert mercenaries, paid to aid him in his quest. He also possessed a large number of giant desert beetles — scarabs — that normally dwell in uncharted portions of the desert.

The first part of Klang's plan was a success: he forced Dodd to uncover the city and discover the location of the weapon. At last, Klang had achieved his ultimate goal. Brashly, he tested the destructive force of this tool of evil by firing into the sand toward Ghafia. This caused a tidal wave of sand that swept through the city, smothering the buildings and blowing down citizens in the streets.

Confident that he now had unstoppable power at his disposal, Klang puts forth an ultimatum: either Ghafia give him one million guilders or he would shake the city until there was nothing left. Police forces sent tanks in an attempt to apprehend Klang, but his defenses left them in the dust (literally). With no way to raise the money in time and no other recourse, Ghafia's fate was sealed.

Fortunately, Baloo (the series' protagonist) and Louie managed to free her from Klang's men. According to her knowledge of Tinabulan lore, there was a "master bell" which when rung would destroy the city once and for all. Despite interference from Klang and his cohorts, Dodd's company found and activated the bell, causing a massive earthquake in the city that completely destroyed Tinabula without a trace and buried Klang and his cohorts as well. However, Klang has survived the burial and is forced to abandon his metallic parts, revealing his true cobra form. Without hesistation, Klang slithers away into the desert unknown, leaving his fate ambiguous. 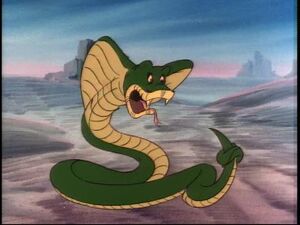 Klang in his true form as a cobra following his defeat.
Add a photo to this gallery

Retrieved from "https://villains.fandom.com/wiki/Thaddeus_E._Klang?oldid=4169051"
Community content is available under CC-BY-SA unless otherwise noted.