Find the Rock of Eternity (successful)

Doctor Thaddeus Sivana is the main antagonist of the 2019 DC Extended Universe film Shazam!. He’s a vengeful mastermind who wants to take away Billy Batson/Shazam’s powers.

In 1974, a young Thaddeus Sivana was in a car with his father and brother being mocked when he was transported away by Shazam the Wizard as a candidate for his champion. Shazam explains that he has spent centuries searching for a new champion who is "pure of heart," after his first turned evil and unleashed the Seven Deadly Sins upon the ancient world. The Sins, now trapped in statues within the Rock, tempt Thaddeus with promises of power, and the boy is rejected by the Wizard and is banished back to Earth in the car, after being deemed unworthy to be the champion. In his confusion and frustration, he made a scene and caused a car crash which crippled his father. This led to his obsession with magic, spending his life searching for ways to gain the abilities he was denied as a child.

Searching for the Rock of Eternity

After being rejected the power of The Wizard and due to him being talked down to by his own father and brother most of his life it caused Thaddeus to spend most of his time obsessed with finding the passage to enter Rock of Eternity to gain the powers. He funded Dr. Lynn Crosby's research and interviewed hundreds of people who were approached by The Wizard to become their champion but they all failed. After a recent interview and watching the video the woman recorded showing the symbol's appearance on her alarm clock seven times, Sivana finally cracked the code.

Writing the symbols on his old door from when he was a kid seven times he finally was able to get access to the Rock of Eternity. While telling Dr. Crosby about the symbols and how the stories all those people they founded were true, she still didn't believe them and went to touch the symbols on the door after doing so her body disintegrated. Thaddeus walked through the door entering the realm, upon arrival, the Wizard questioned who he was and how he got there.

Thaddeus recalls the time he was at the realm when he was a child, in doing so the wizard remembers who he is and demands he leave saying he can't have the power cause he is not worthy. This angers Thaddeus who retaliates by grabbing an orb that is used to keep the Seven Deadly Sins imprisoned in their statue-like state. Grabbing onto the orb the Sins manipulate him into freeing them which he does and they infiltrate his body by entering his left eye which turns it blue with magic.

Leaving the realm, Thaddeus unknowingly also freed Mister Mind along with the Sins and arrives at his father's company, Sivana Industries. Upon arriving at a board meeting, Thaddeus locks the doors to the room so no one can leave or enter after trying to show his father and brother the magic he now possesses he instead throws his brother out the window killing him. After showing his strength he grew from the Sins, Thaddeus unleashes the Sins on the other chairmen ruthlessly killing them all except for his father, to gloat to him showing him what "real power" is but one of the sins alerts Thaddeus that the wizard has chosen a new Champion to which Thaddeus demands to know where he is.

Upon leaving the office to find the new champion Thaddeus unleashes one of the sins on his father killing him. Entering the elevator the program began talking about the family which angers him and he breaks the screen showcasing the program. Sometime later after trying to find the whereabouts of this new champion he finally finds him making a show in the streets for money and accidentally causes a bus to almost crash off the highway. Flying to this champion he demands the power the wizard gave him which he doesn't understand mistaking him for a fan.

Annoyed, Thaddeus demonstrates his strength to him by punching him into the air and crashing into a police car. Injured, Billy gets up from the car as Sivana reveals the only thing that can hurt magic is magic, Billy then punches Sivana in his genitals which angers him so he takes Billy and lifts him up to the air which frightens him. He apologizes for hitting him in his groin multiple times, this makes Sivana question who he is cause he sounds like a child which he reveals he is a child.

His foster siblings followed them, though, and Freddy hits Sivana with his Batarang. Billy noticed it drew blood from the supervillain, realizing he is only powerful when the demons are within him. They escape to a carnival, but Sivana tracks them down. Shazam turn his siblings into superheroes by saying "Shazam"! They fight with the seven deadly sins, while Shazam fights against Sivana, landing on a rooftop. Shazam goads the last sin; Envy. It rips itself out of Sivana's eye, Billy screams SHAZAM and hurts it. Sivana is knocked off the roof, Shazam grabs Sivana, who is now powerless, and drags him into the carnival, ripping his magic eye off, trapping the sins within it.

In prison, Sivana is seen drawing symbols in an attempt to reenter the Rock of Eternity, when he is interrupted by Mister Mind, who recruits in a partnership to take over the nine realms. 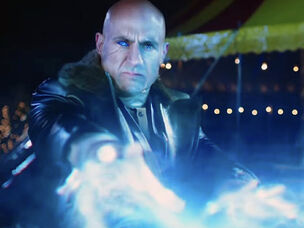 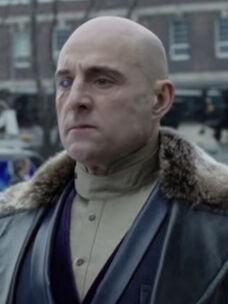 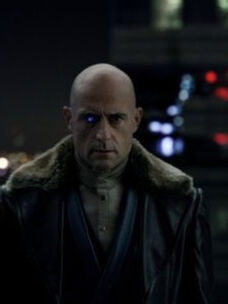 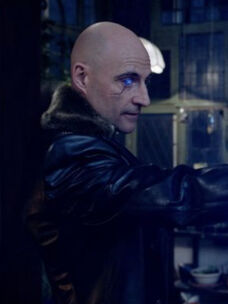 Retrieved from "https://villains.fandom.com/wiki/Thaddeus_Sivana_(DC_Extended_Universe)?oldid=3048882"
Community content is available under CC-BY-SA unless otherwise noted.