Head of the Guild of Historians

Observing and ruling the City of London

Find the book so that he could take control of the world.

Keep on capturing other outsiders.
Destroy all residences and bring new world order.
Kill Tom and Hester to avoid being exposed for killing Hester's mother (all failed).

Thaddeus Valentine is the main antagonist of the 2001 young-adult science fiction fantasy novel Mortal Engines by Philip Reeve, and its 2018 film adaptation of the same name.

He is the Head of the Guild of Historians who is also Katherine Valentine's father and Tom Natsworthy's former mentor, serving as the latter's father figure, as well as Hester Shaw's arch-nemesis before later being revealed to be her biological father. Appearing on both adaptations of the story as an obsessed leader who aspired to rule everything all over, Thaddeus sought to find a very important book in his quest to completely rule London and all of the world altogether; this involves trying to kill Hester, who takes it upon herself to eliminate Valentine at all costs.

He was portrayed by Hugo Weaving, who also played Agent Smith in The Matrix, Megatron in the Transformers series, David Melrose in Patrick Melrose, V in Vendetta, and Red Skull in the Marvel Cinematic Universe.

In the past, Thaddeus Valentine was the lover of an archaeologist who loves to travel across the world, Pandora. He was also the father of Pandora's daughter, who was also the film's main protagonist known as Hester Shaw. Initially portrayed as a caring family man, he reveals his true nature once Pandora found an ancient technology that was found in a Dead Continent of America - which resulted in him murdering her; when Hester saw Thaddeus's atrocities, he ended up scarring her face before she eventually escaped from his wrath and would later get herself a necklace that her mother relinquished to her.

In the first parts of the film, he was introduced at first observing the mobile city of London devouring a small mining town known as Salzhaken (Salthook in the novel). Once said city is devoured, Thaddeus seemingly welcoming the citizens of Salzhaken and promises that they will be given a good hospitality. Not only that, he also seemingly has a cordial relationship with the apprentice of Guild of Historians, Tom Nasworthy, and his daughter, Katherine Valentine.

However, one of the Salzhaken citizens, the aforementioned Hester Shaw, has the intent to murder Thaddeus, but once she tries stabbing him in the chest (which injures him, but he survives), Tom catches her, and she runs away from the scene and escaped using the chute. Before she escapes, she told Tom that Valentine murdered her mother and scarred her face. Confused, Tom gives the information to Valentine, and while initially Valentine accepts the information, he proceeds to push Tom down the chute.

Later, in the final battle, Thaddeus Valentine destroyed the ATL airfleet. He was then challenged by Anna Fang. They fought fiercely in one-on-one combat, which ends with Thaddeus Valentine mortally stabbing Anna Fang with his knife. In that moment, however, Hester Shaw managed to shut down the M.E.D.U.S.A. Machine much to Valentine's shock. He could only watch in horror to see that Hester Shaw has shut it down, before Anna Fang urges her to flee; as Hester Shaw does flee, Anna Fang dies after tauntingly telling Valentine that his plans for world domination are over - shortly before she herself falls to her death.

Back in London, Thaddeus Valentine was confronted by Kathrine - who had just discovered the truth about her father's evil nature. She disowns him before leaving to help the others, whilst Thaddeus decides to leave her behind and escape. However, he was finally confronted by Hester Shaw moments later. By then, Hester Shaw was now prepared to kill Thaddeus Valentine and avenge her mother's death in the final battle. Dismissing her intent, Thaddeus reveals to Hester that he is her father before they engage in one-on-one combat. Thaddeus Valentine initially has the upper hand and prepares to kill Hester Shaw, but she ultimately defeats him by slashing his face in the same manner as he did to her.

Initially, Thaddeus is portrayed as a charismatic, polite and jovial man in the first part of the film to the point that he promises the citizens from the small town that got devoured by London itself a good live in London. He also seemingly has a good relationship with other people such as his daughter, Katherine, and the apprentice of the Guild of Historians, Tom. He also claims that what he did in the movie was for the sake of London's benefit. However, this was all just a ruse.

In reality, Thaddeus is a man who has a huge obsession with the power that he was given, and anyone who defies him will be either left behind or Thaddeus just simply got rid of them by his hands. One example is Tom, who he had no hesitation in betraying by shoving him down the chute once Tom tells him the information about Hester's dead mother, despite supposedly having a cordial relationship with him in the first part of the movie. Another examples is Katherine, as he shows no qualms in abandoning her as he rams London through the Shield Wall once she disowned him for discovering his true colors despite their seemingly developed relationship earlier on.

Thaddeus is also a type of person who tries his best to get whatever he wants by using dirty tactics to do so such as murder and destroying anything in his path. One example of his unfettered nature is that when his wife, Pandora Shaw, got one of the piece of an old technology, he callously murders her and when Pandora's child, Hester, saw the atrocities that his father committed, he scars her face which resulted in her becoming an assassin that tries to seek vengeance. Another example of his unfettered nature is his willingness to ram London into the "Shield Wall", which would cause more innocent deaths once his plans to fire MEDUSA failed miserably thanks to Hester's quick thinking, and more importantly, directly contradicted his claims that what he was doing was for London's survival. 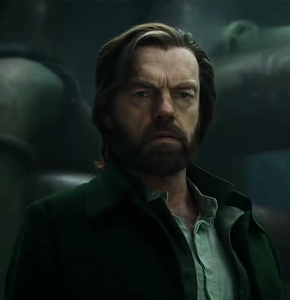