Alinor on the Summerset Isles

Establish a third Aldmeri Dominion (succeeded) Make the Empire agree to the terms of the White-Gold Concordat (succeeded)
Wipe out all humans across Tamriel.
Establish Altmer supremacy.
Destroy the Empire.
Wipe out the Blades (failed).
Kill the Dragonborn (failed).
Abolish Talos worship.
Return elvenkind to Godhood.

The Thalmor are the main antagonistic faction in The Elder Scrolls V: Skyrim as they are fought in numerous main story quests such as "Diplomatic Immunity" and "A Cornered Rat". They were the most imminent evil force in Tamriel prior to the appearance of Alduin and the return of dragons.

The Thalmor are the ruling party of the Aldmeri Dominion, consisting entirely of supremacist High Elves (Altmer) whose goal is to weaken the Empire and end the worship of Talos (also known as Tiber Septim, founder of the Empire), alongside wiping out the human races of Man. The Thalmor had tried for centuries to seize control of their homeland of the Summerset Isles and at the end of the third era were able to do so by claiming to have closed the Oblivion Gates of Mehrunes Dagon, thus taking credit for ending the Oblivion crisis.

The Thalmor are fundamentally opposed to the notion of the Man god Talos due to an old Altmer creation belief stating that the Mer (High-Elves in particular) are half-ascended Divines, held back from becoming true gods by the other mortal races. This in turn leads the Thalmor to two very distinct mind-sets; one being that no Man could possibly ascend to divinity before them and therefore the worship of Talos is blasphemous, and the other being the quickest way for their race to achieve its intended apotheosis is to destroy all other mortal races.

About thirty years prior to The Elder Scrolls V: Skyrim, the Thalmor instigated the Aldmeri Dominion into engaging the "Great War" against the Empire, which cost the lives of almost all of the Blades and ended with the emperor forced to give into many of the Thalmor's demands, in a treaty known as the White Gold Concordat. This treaty encompasses banning the worship of Talos, disbandment of the Blades and surrendering Hammerfell as territorial compensation. Though the Thalmor frequently boast about their victory over the Empire, in truth the Empire dealt their forces a critical blow in turning back their invasion of the Imperial City and the only reason they were even willing to consider the treaty was because an extended conflict might have permanently crippled their military.

After the War with the Empire, the Aldmeri Dominion invaded Hammerfell, the very land which was to be surrendered as part of the White Gold Concordat. Its Redguard citizens felt betrayed from the terms and decided to rebel in defiance, leaving the Empire with no choice but to nullify Hammerfell's alliance with them to prevent further conflict. This further enabled the Redguards to continue fighting albeit alone, which benefitted the Dominion. However, due to their previous war with the Empire having weakened their forces, the Dominion was stretched thin and were unable to claim Hammerfell. Upon realising the losses, the Dominion gave up on their claim and Hammerfell thus became independent, free from the Dominion and the Empire.

Despite being shown their military limitations the Thalmor were able to conquer their adversaries through shrewd and cunning negotiations. The ban on worshipping Talos was not just to satisfy their ancestral sensibilities but also to create a rift between the empire and its province of Skyrim, a land far more culturally attached to Talos (their native son). A Thalmor, Elenwen, was given a captured prince named Ulfric Stormcloak during his attempts to challenge the Empire's treaty with the Aldmeri Dominion. Elenwen, rather than simply killing or exiling Ulfric instead chose to turn him into an unwitting asset for the Thalmor. Elenwen tortured Ulfric for months, during which time she implied that the Thalmor were only doing so as a favor to the Empire. She claimed wanting to make an example out of him to preserve their treaty, but by all accounts this is in-fact a lie and the only authority the Empire had in the matter was handing him over to the Thalmor for the sake of the treaty. After a long time under cruel torture, Elenwen arranged for the Thalmor guarding Ulfric to subtlety minimize security and Ulfric surely escaped. He started a civil war in Skyrim and the Empire's only major remaining ally began collapsing in on itself while the Dominion had time to recover and amass its forces in anticipation of a second conflict. For her lucrative scheme Elenwen was promoted to the head of the Thalmor's Skyrim branch.

Skyrim was not the only place hit by the Thlamor's diplomatic machinations; many of Hammerfell's nobles and politicians were instigated against each-other as well. Though the Thalmor had no official power there they secretly backed various power-seeking nobles in letting different clans destroy Hammerfell's infrastructure by escalating political rivalries.

Thalmor agents are only encountered in a few locations in Skyrim, most notably the Thalmor Embassy in the west of the capital city Solitude which the Dragonborn has to infiltrate during "Diplomatic Immunity" to retrieve information related to the dragon crisis which the Thalmor have a minor involvement in (with regards to the Blades which were disbanded following declaration of them as enemies to the Thalmor).

The Thalmor are known to be extremely arrogant and constantly insult the Dragonborn when encountered and tell them to mind their own business. They will attack if pushed, especially when enquired about Talos worship and stating that people are free to worship what they want as a response. The Thalmor are also known sending their Justiciars to hunt down and kill the Dragonborn if they has caused sufficient trouble for the Thalmor (especially after completing "Diplomatic Immunity" where the Thalmor embassy is infiltrated). Even being an Altmer doesn't provide the Dragonborn immunity from being hunted down.

The Thalmor is shown to have a hand in many nefarious plots. They must humor the Elder Council in the Imperial City along with the Emperor of Cyrodiil due to their treaty, but the policies they gain from it allow them to undercut the Emperor's power from him by arresting citizens with little to no proof of heresy. Politically, the Thalmor have bought off one of Skyrim's main politicians, Erikur, a thane in the court of Solitude, Skyrim's contested capital. Erikur will succeed the current High-Queen, Elisif the Fair, if she ever dies or loses power which presents the Thalmor with a good source of influence.

Despite his hatred of them, even Ulfric Stormcloak is a reliable asset for the Thalmor as the rampant hatred they instilled in him is directed at the Empire in hopes to tear it apart from the inside. The wealthy entrepreneur and crime boss Maven Black-Briar looks to be in the Thalmor's pocket, however Maven is less of an asset and more of a threat whom they ensure paying off to avoid conflict; Maven sees it less as a partnership and more as an agreement to stay out of each-other's business. The Jarl of Morthal, Idgrod Ravencrone, strongly dislikes and distrusts the Thalmor, however humors their attempts to bribe her, mostly to keep an eye on their influence, thus keeping her on her toes.

The Thalmor, Ancarion, is sent to enforce the Thalmor presence in Solstheim and is even on the hunt for powerful gear native to the area and its Skaal inhabitants to be re-appropriated for them. Since the College of Winterhold has a nebulous, at best, attachment to Skyrim law, the Thalmor Ancano is sent to the College in hopes to influence the Arch-Mage, Savos Aren. As Savos's right-hand, Master Wizard Mirabelle Ervine is quick to remind Ancano, that he and his party have no actual authority over them and Arch-Mage Aren only humors his presence for the sake of political harmony. Aren seems to shrug off most of the Thalmor's concerns (given at least two of the mages there openly believe in Talos) and yet he is perhaps the only member of the College that is willing to offer Ancano and the Thalmor any benefit of doubt given absolutely no one else trusts Ancano's presence there. Ultimately Ancano is shown to be behind a scheme against the College, attempting to take control of the recently uncovered Eye of Magnus.

The Fists of Thalmor, sometimes shortened to simply "Thalmor", and originally known as Justiciars, are Thalmor agents and a para-military unit of the Dominion military in The Elder Scrolls Online.

The Justiciars were known to have decreed a 17th Degree Inquiry into the finding of Princess Ayrenn in 2E 563. Due to the heavy-handed nature of the Fists' enforcement duties, negotiations for aid from the indigenous locals of Valenwood have become more difficult for the Thalmor Diplomatic Corps.

The Thalmor Diplomatic Corps are diplomatic agents and representatives of the Thalmor and they are enemies in The Elder Scrolls Online.

Thalmor Justiciars can be sent to kill the Dragonborn. This will start to happen when the Dragonborn has completed the quest "Diplomatic Immunity". The same applies if the Dragonborn has initiated hostilities with them by attacking Northwatch Keep or the Thalmor justiciars roaming Skyrim. They may also engage the Dragonborn after killing Ancano during "The Eye of Magnus". Prior to the completion of these events, only the "assassin" squads sent specifically to hunt the Dragonborn will be hostile on sight; regular Thalmor squads will initially be neutral to the Dragonborn. 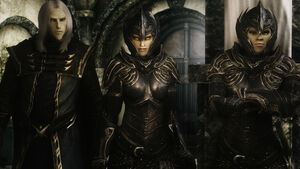 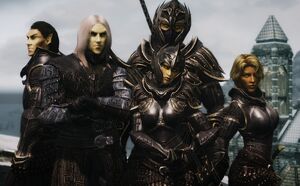 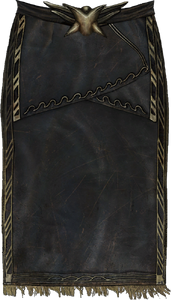 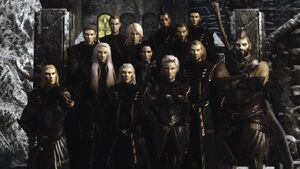 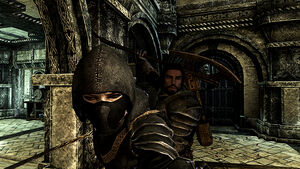 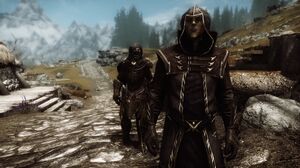 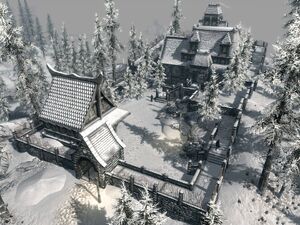 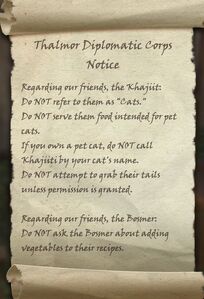