Kill Pit and Palutena for Medusa and Hades.

Keep Pit from getting the key to the Underworld.
Kill Phosphora (all failed).

Sadistic Death God
Thanatos (in Japanese: タナトス Tanatosu), also known as Tanatos in the first Kid Icarus game, is the God of Death and a general of Hades' army. He was the ruler of the Seafloor Palace before being finished off by Pit and losing his key to the Underworld.

Thanatos was soon revived by Hades but was soon defeated by Phosphora, sending him falling. It is unknown if he is alive or dead.

He was voiced by Eiji Itō in the Japanese version, and Danny Mann in the English version.

In the original NES game, the god of death had a much simpler design as a large green snake with thick, blue lips that resided within Medusa's hair.

In Kid Icarus: Uprising, Thanatos resembles a large chubby genie with a cracking green skin tone and clown-like characteristics. He has two red eyes with cross-shaped pupils, as well as a large, smiling mouth with blue lips and two fangs. He also has a short, stubby nose, a red jewel embedded in his belly, and a skull ornament at the tip of his head, which seems to have a mind of its own. Thanatos wears silver shoulder armor, a red scarf, and a pair of large, genie-like trousers decorated with yellow and red vertical stripes. In addition, the armor on his shoulders appears to be covered with various branch-like structures that have jewelry hanging from them, as well as bolts of dark energy swirling around them. His overall design in Uprising makes him look like a clown according to his SSB4 trophy. Thanatos is a shapeshifter and has a multitude of transformations that he can use during battle, including a matryoshka doll-like version of himself, a pot with his face in it, and a bat-like creature. He can also change into a cloud of bats to warp around the room he is battled in. In addition, some of his transformations include various items and objects from the game, such as the Atlas Foot and the blade of Magnus.

Thanatos is very flamboyant and eccentric despite his position as a god of death and has a very goofy disposition almost all the time. This makes other characters to find him quite annoying (even including the typically upbeat Pit). Thanatos enjoys witty repartee and likes to make humorous conversations and jokes, even to his enemies. He is also very sensitive, easily getting offended when ignored or told to shut up. Despite showing loyalty to Medusa and not wanting to give up the key, he insisted on handling things more civilly at first, wanting Pit and Palutena to hang a while and catch up due to, as he puts it, "Prefers honey to vinegar".

Thanatos is also noted to be very lazy. When questioned by Palutena why he, a god of death is not the ruler of the Underworld (the land of the dead) and does not outrank Medusa, he simply claims that he does not like climbing the corporate ladder due to the larger amount of work one has to put in and that it is not the Underworld's style to have a strict hierarchy, Palutena claims this is not a straight answer and he simply just covers up his ears and pretends not to listen while making ridiculous sounds. Because of this, Pit cannot tell if Thanatos is just weird or dim.

In "Thanatos Rising", the god of death shows a more sadistic side that belies his clownish appearance and nonchalant demeanor by eagerly attempting to destroy a human town and lamenting when his attempt was stopped by Pit, calling it his "lovely carnage", showing that he may not be as foolish as he seems.

Despite his eccentric and flamboyant demeanor, Thanatos proves to be a very capable fighter. Thanatos's main power is his ability to shape-shift, allowing the god of death to assume whatever form is on his mind. During his boss fight, Thanatos is capable of transforming into a bat, a foot, a matryoshka doll, a sword with several spears, and an urn. Thanatos is very adept with his shapeshifting powers, able to morph even the smallest parts of his body as shown in the Thanatos Rising anime short where he transforms his hand into a large mace to attack Pit.

On top of his shapeshifting abilities, Thanatos also displays other magical feats. Thanatos has the ability to levitate in mid-air, which seems to be his preferred method of travel as he's never seen walking. In battle, Thanatos can toss skull-shaped blasts of dark energy and fire dark fireballs from his wings. Thanatos can also use his magic to enchant other objects as shown in the anime short where he causes the Trojan Horse-like tank to sprout wings and fly. Thanatos is also capable of teleportation and can communicate with the other gods via telepathy.

As noted by Hades, Thanatos's status as the god of death prevents him from being truly killed and allows him to be resurrected indefinitely, as Hades was able to resurrect him two times.

Thanatos appears as a trophy in Super Smash Bros. for 3DS and a primary shield type spirit in Super Smash Bros. Ultimate. His spirit battle is against King K. Rool on the Battlefield form of the Kalos Pokémon League stage that starts giant-sized but becomes tiny after a little while. 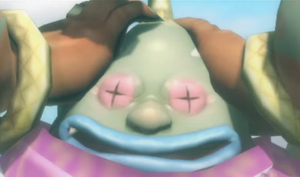 Thanatos as he appears in Thanatos Rising. 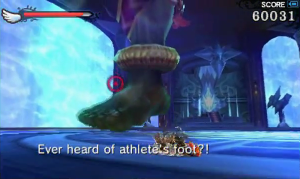 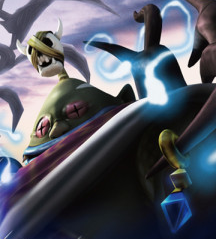 Thanatos artwork for the anime.