Hating his brother King Aron.
Preying on the insecurity and hopes of his victims.

To rule over Coventry (failed).

Thantos DuBaer is an evil sorcerer and he is a major villain in the Twitches book series by Scholastic Press and the main antagonist of both the 2005 Disney Channel Original Movie Twitches and its 2007 sequel Twitches Too. He is the father of Ileana DuBaer, the brother of King Aron and Fredo Dubaer, the brother-in-law of Queen Miranda, and the uncle of the film's protagonists Camryn and Alex.

He was portrayed by Patrick Fabian.

Thantos owns a multi-million-dollar, multinational business and is extremely powerful in both worlds. He practices dark magic and was always jealous of his brother, Aron. He has tried to kill the twins numerous times but failed. Toward the end of the series, he asked their Miranda-Martine DuBaer to marry him but she said no. In Book 10, he was to be ignored by everyone on Coventry Island at the end of the twins' initiation.

Thantos, out of jealousy and lust for power, went after his brother Aron and his (Aron's) twin daughters, Apolla and Artemis in his shadow form emerged out of the monstrous evil known as "the Darkness". Aron transferred his power to Apolla and Artemis before Thantos supposedly killed him, however, before he could kill the twins, their power was able to banish the Darkness.

21 years later, Thantos was married to Miranda, Aron's wife, who was unaware of his true nature. The Darkness became more powerful over time and Thantos began seeking Apolla (now going by the name Camryn) and Artemis (now going by the name Alex), to kill them. Thantos attacked Camryn's house but she wasn't there. Later, Thantos attacked Camryn and Alex at Alex's house, which they barely escaped and nearly caused Camryn to abandon Alex in the fight against him.

Thantos attacked Camryn again at her birthday party, swallowing the twins' protectors Karsh and Ileana in order to consume their souls. After escaping from Thantos back to Coventry, Camryn showed Miranda and Alex a picture she drew from one of her visions in the past about Thantos's face coming out of the darkness, and they realized that he was behind the Darkness. Thantos took his shadow form and swallowed Miranda. However, using the power of light and love, Camryn and Alex seemingly destroyed Thantos, releasing Miranda, Kersh, and Ileana.

However, only Thantos's physical form was destroyed, the rest of him clung to life in the Shadowlands, where it is revealed Aron escaped to after surviving Thantos's attempted murder of him. Thantos appeared as a shadow, and although Alex could tell that Aron's shadow was present as well, it was clear Thantos was regaining his power. To prevent him from regaining human form, Miranda told Alex and Camryn to use a Vanquishing Spell to destroy everything in the Shadowlands.

When the eclipse came, the Twitches were able to use the Vanquishing Spell to summon the Light as part of the important plan to save Coventry and vanquish evil once and for all. However, Alex did not want Aron to be destroyed along with Thantos so she searched for a way to save him before the destruction of the Shadowlands and Thantos, pretending to be Aron, showed her a spell to release one from the Shadowlands. Alex released Thantos, only discovering his identity after his return. Thantos went after Aron's shadow to destroy him - even though his death was imminent, Thantos wanted to personally kill his brother.

Atop the high tower at the Coventry Castle, Alex, Camryn, Miranda, Karsh, and Ileana fought against Thantos, but he gained the upper hand. However, Alex, Camryn, and Miranda used the same spell that released Thantos to release Aron from the Shadowlands. Thantos attacked them a final time but Aron hit him with a magic spell sending him falling down a shaft into a light, destroying him for good.

Thantos is a powerful and cruel sorcerer, and his known powers are cold and ice manipulation, telepathy, hyperactive sight, smell, and hearing, and the ability to blind people temporarily. 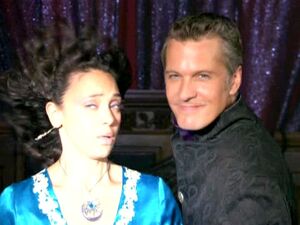 The traitor Thantos takes Queen Miranda before becoming one with the Darkness.