Advance the Hive (all failed).

The Abomination is the Predalien that appears in the 2010 video game Aliens vs. Predator. It serves as the main antagonist during the Predator campaign.

The Abomination had its origins when Karl Bishop Weyland began conducting illegal Xenomorph experiments in the hopes of enriching Weyland Yutani. The Xenomorphs, led by Specimen Six, a much more intelligent Xenomorph, liberated the Matriarch and escaped, resulting in a hive being established in Freya's Prospect. Before long, the Colonial Marines arrived on the planet to shut down the infestation, followed by the Predators who arrived to take back the technology Weyland Yutani had stolen, initiating a three way world war on the planet.

One of the Elites, Wolf, arrived on the planet searching for a pair of Young Bloods. He found them engaged in battle with a horde of Xenomorphs, and saw them be killed by Specimen Six. Wolf entered the arena to avenge them, but was defeated by the heroic Xenomorph and impregnated with a facehugger. A short time later, the Matriarch was burned to death, but the Abomination emerged later regardless. The Abomination promptly went on a killing spree, killing a colonist before being driven off by two Marines. The Abomination then proceeded to rip the skull of the colonist.

After a long fight to regain the technology from Weyland Yutani, Dark headed into the Predator pyramid, to destroy the body and the entire region with a nuclear wrist bracer. After priming the nuke to destroy the entire region, Dark was attacked by the Abomination, and the creature tackled the Elite Predator into a battle arena. The Abomination proved a difficult adversary, including bringing the roof down on Dark, but after a long and hard fight, Dark killed the Abomination, ascended to the Pyramid's roof, and held the dead creature over his head before throwing it into the lava, bringing an end to the Abomination forever. 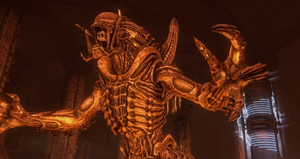 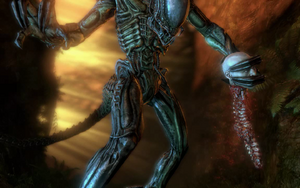