The Alchemist (Prince of Persia)

Serving his master, experimenting on people, gaining knowledge and power.

Become omniscient by unlocking all life's secrets.
Serve Ahriman for personal gain and to stay alive.

The Alchemist is one of the bosses of the 2008 game Prince of Persia, who serves the God of Darkness, Ahriman. He will stop at nothing to further his masters and by extension his own goals.

He was voiced by Paul Mercier.

According to the game at first the unnamed alchemist of the Ahura tribe that served the God of Light, Ormazd. Over time he grew obsessed with becoming omniscient by learning all that the universe had to offer. As time went on he grew more cold to the point he allowed no form of morality restrain him and did atrocities to gain more of an understanding of the universe. As he grew older he realized that he would soon die and all of his work and advancements would be for nothing. Desperate for immortality he prayed for Ormazd to give it to him but to no avail. As all seemed lost he heard Ahriman claim he could grant him the secrets of immortality but only would do so if he would sell his soul to the dark God. To the Alchemist this was a great deal and thus accepted it without hesitation. As promised Ahriman gave him an equation that could grant eternal youth. The equation itself was supposedly so complicated it was near impossible to decipher. The Alchemist died just as he believed he was on the verge of a breakthrough but this was not a permanent death as he came back as a Corrupted thus gaining a form of immortality. Now he was more than happy as not only did he get the immortality he so craved but while he would serve his master for eternity he could also continue his work without fear.

Eventually, the Alchemist, the fellow servants of his God and Ahriman himself were sealed within the Tree of Life. Over time however they would escape and seek to destroy the Fertile Grounds, a man only known as Prince and a young woman blessed by Ormazd named Elika so as to secure that they would remain free since these were the only threats to their power. The Alchemist ultimately dies when his soul is forcibly cleansed of Ahriman's power thus losing the only thing keeping him alive, finally putting an end to his reign of terror.

The Alchemist is portrayed as an extremely intelligent man who craves nothing less than complete immortality and omniscience. He gladly committed all sorts of atrocities and eventually sold his soul to Ahriman in return for eternal life. He never shows an ounce of remorse and while he speaks in a composed manner he makes it very clear he enjoys making his enemies suffer for as long as possible. He only values knowledge and his own life which is mildly implied to be one of the only reasons he even values Ahriman is due to said God being the only reason he is currently alive, as his life is tied to the God and less on actually being loyal to him.

He also believes anyone who refuses to see things similar to his view are simply beneath him and unwilling to learn due to their morals or ethics. In short if he believes it will benefit him in anyway he will gladly do anything to achieve his goal not caring who he has to hurt. This is pointed out by Elika as she claims he did all sorts of atrocities on his own people to gain more knowledge on how the universe worked.

The Alchemist is shown to be able to teleport small distances, control over a substance dubbed Corruption using it as a way to teleport, and can shape it into tendrils to use as weapons. Like all the Corrupted he is physically stronger than he might appear in brute strength to the point he is able to combat Prince on somewhat equal terms without his other abilities. He is shown to be rather skilled and powerful with using magic throughout the fights. He also is virtually immortal only able to die if his soul is cleansed which when combined with all the former abilities make him a very dangerous opponent that is not to be underestimated. 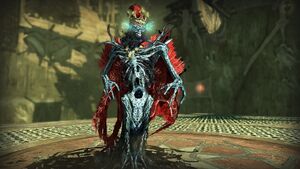 Alchemist as shown in game.