Robbing heroes of their superpowers and equipment to add them to his collection.

Antagonizing and Fighting his enemies.

Turn every superhero, including Skylar Storm evil to create an Army of Evil Superheroes to annihilate the world and become the greatest supervillain of all time.

Destroy Kaz, Oliver, and Hapaz the Elder (all failed, but briefly succeeded with Skylar until she was revived).
Kill Skylar Storm for her betrayal (succeeded until Horace resurrected her)

His ultimate goal is to create an army to take over the world by turning all superheroes, including Skylar into his evil servants. He used a device containing a serum that can contaminate superpowers and link them to his control. The first of his victims was Skylar Storm herself.

He was voiced by David Sobolov and portrayed by Morgan Benoit, who also portrayed Nightstrike another villain from Mighty Med.

Neil Gunzenhauser was born on earth and started exhibiting his mutant powers as a child. Everyone teased and tormented him from being a freak, so he withdrew from society.

But he didn't become truly powerful until he was discovered and trained by the legendary Hapax The Elder, a human with similar mutation, who wanted to groom Neil to be a great superhero. But Neil decided to use his powers for evil, to make everyone suffer the way he suffered. Hapax The Elder was so upset about being betrayed that he went into self-imposed exile on the planet Caldera.

He spent the last 30 years battling superheroes and stealing their equipment and superpowers. He also frequently battled his archenemy Skylar Storm until he eventually succeeded in taking her powers.

The Annihilator was mentioned in Saving the People Who Save People, when Skylar tells Kaz and Oliver that the Annihilator took her powers in a battle and left her standing there in her underwear. It was revealed in "The Friend of My Enemy" that he somehow recruited Skylar's former friend Experion and sent him to Mighty to kidnap her bring her to him so he could kill her himself. Fortunately, his plan failed when Oliver became suspicious of Experion.

Later one year after him stealing her powers, with Skylar slowly dying due to not having them in There's A Storm Coming, Oliver and Kaz managed to find and break into the Annihilator's lair. There they found Skylar's stolen powers, along with the dozens of other powers he stole over the years. However, they were confronted by the Annihilator who tried to steal Oliver's life force. Taking a weapon, Absolute Zero's Freeze Ray, the Annihilator had stolen from a hero, Kaz tried to save his friend, but the Annihilator just absorbed the ice-weapons effect. However, Kaz then used it to burst several pipes filling the room with steam. In the confusion, they escaped. They returned the powers to Skylar, but before she could reabsorb them, the Annihilator arrived having placed a tracking chip on the container. He then tried to kill Skylar. A fight broke out between them, using a hologram Skylar managed to distract and defeat him. The Annihilator was captured by security. However, upon taking her powers back, Skylar was corrupted. The Annihilator revealed he had altered the so he could now control Skylar. She freed him.

Instantly after this in How The Mighty Med Have Fallen, the Annihilator and Skylar Storm conquered Mighty Med, Horace managed to buy them some time by freezing Skylar, but the Annihilator simply absorbed the attack and turned it back on him. Oliver and Kaz, where soon captured and placed in Mighty Max prison, along with Alan. There following finding an escape tunnel another villain dug earlier, they wound up with Megahertz in the execution chamber. However, they managed to get free when Alan was scared enough he turned into a blue whale and burst them out. Megahertz agreed to one favor and gave Oliver's cellphone enough power that he was able to contact Titanio and warn him about the Annihilator.

Meanwhile, the Annihilator tried to force Horace to reveal where the chip containing all the superhero's data was so he could turn all of them into his evil servants. Horace managed to continue avoiding until they finally got him to reveal it. However as he described it as a potato chip, Oliver and Kaz had already eaten it. To get it out the Annihilator tried to cut them open. But Kaz fooled him into using a forest ray, immobilizing them both for a short while. Getting free they faced them, only for Titanio to arrive with a small army of heroes. The Annihilator and Skylar fought them off but were soon overwhelmed by the sheer number of heroes. However, at the last minute, Skylar remembering what Oliver and Kaz had said earlier, had Megahertz blast a canister containing Rewind's power (which the Annihilator had also stolen) sending them back in time before her reveal. There they formed a new plan, that she would play along, and thus secretly turn all the heroes into his servants, while he was supposedly imprisoned.

It's revealed in Do You Want To Build A Lava Man, that once he was an ordinary boy called Neil Gunderhausen. Due to a mutation, he began to display powers, ostracized from the community, he went under the guidance of Hapax the Elder, who taught him to use his powers hoping he would be a great hero. But his heart turned cold by his experiences, which led him to betray his master and ended up using his powers to hurt all others, taking the mantle, the Annihilator. In an attempt to stop him, Kaz and Oliver traveled to Caldera, where Hapax had gone to live following the shock at his pupil's betrayal, hoping to convince him to stand up to the Annihilator. They managed to convince him to help, but at that moment the Annihilator and Skylar ambushed them.

Arriving he had Skylar freeze Oliver and Kaz, and planned to destroy them. At that moment however Hapax returned, realizing this he freed them and took on the Annihilator, the fight carrying on, the Annihilator managed to get the upper hand. But Oliver managed to grab his blaster and threatened to shoot him unless Skylar surrendered. However, Skylar instead hit the Annihilator with a powerful energy blast seemingly killing him, having decided that she wanted to rule the universe herself. However, Oliver managed to defeat Skylar and had Hapax drain her corrupted powers, turning her good again. At that moment the Annihilator shot Skylar, revealing he was still alive. Turning on his evil student Hapax absorbed the Annihilator's life force, killing him and freeing all the heroes. But it turned out he had shot Skylar with Black Widower's poison meaning she had moments to live. Oliver and Kaz got her to Mighty Med, but it was too late and Skylar died.

Thankfully she was resurrected, depriving the Annihilator of his final victory.

The Annihilator's legacy would still haunt the staff and heroes at Mighty Med after his death. Skylar had almost died when he shot her with Black Widower's poison before Neil had met his demise. It also took Skylar some time to be accepted again by the hospital staff. This also made Skylar feel that she needed to protect everyone because she hurt a lot of people she cared about. She also felt that her goal of regaining her powers and becoming a superhero again was unattainable until Chase Davenport found a way to restore her powers. When Oliver mentions why Skylar doesn't have powers in the first place is the cause The Annihilator drained it from her and Chase thought the nature of his power is ridiculous.

Despite his death and defeat The Annihilator's influence on Skyler never ended. In the Lab Rats: Elite Force episode "Power Play" Oliver mentions they Skylar lost her powers to the Annihilator's to Chase Davenport, who didn't want Skylar to feel like she was expendable to the team. He found a way to restore her powers, which were always there but have remained dormant within her DNA. However, Skylar's powers continue to glitch. Also after his showdown with Kaz and Oliver, Skylar's homeplanet Caldera fell to a state of civil war, with Scarlett (one of Skylar's best friends) being one of the leaders of the Opposition who is bent on taking over the universe. 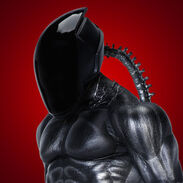 The Annihilator close up 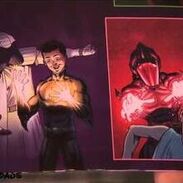 All the Superheroes superpowers he stolen

The Annihilator absorbing a blast of ice from Absolute Zero's Freeze Ray.