To defeat anyone who gets in his way.

Super Criminal
Aaron Nicholson, better known as The Answer, is a supervillain from the Marvel comics. An unnamed criminal also used the Answer persona.

The Answer started working for Richard Fisk, who controlled the Las Vegas division of HYDRA. He was the top hitman, as he always had an answer to any problem.

He volunteered to be the guinea pig for Fisk's attempt to grant superhuman powers, using equipment of the late Harlan Stillwell. It didn't seem to work, but sometime later, when he was cornered by enemy assassins, he suddenly developed super strength and overpowered his attackers. When he arrived home, he found his strength had disappeared again. Later, he developed the power of flight to escape an explosion. These and some other incidents led him to understand his powers: he had gained the ability to come up with whatever what was necessary to resolve the given situation.

The Answer observed the struggle between Spider-Man and the Blob, gaining information on Spider-Man's powers, skills and his new costume.

The Kingpin then send the Answer to engage Spider-Man to test his abilities. At first, the Answer seemed no match for Spider-Man, but each time Spider-Man attacked, the Answer gained the ability to counter the attacks. Very soon, the Answer had Spider-Man at his mercy, pummeling him with thousands of punches within a few seconds. The Black Cat jumped between them and stopped the fighting. The Answer knew about her bad luck powers, so he avoided her attacks but didn't attack back. Spider-Man tried to web him to the floor, but thanks to his costume the webs didn't stick it him and he simply broke the spots on the floor holding the web to escape. He then threw the web onto Spider-Man and the Cat, trapping them. He then flew away.

The Answer observed a fight between Spider-Man and the Black Cat. The Kingpin was planning to use the Black Cat's bad luck powers to cause trouble for Spider-Man, so he had Answer arrange things to keep them together. The Answer held Black Cat prisoner with a bomb, and then allowed Spider-Man to "save" her. The Answer escaped and the bomb was merely impressive fireworks, but the plan worked. Spider-Man and Black Cat were friendly again. In addition, the Kingpin had the Answer use the distraction to steal the corpse of the cyborg Silvermane. He was planning to use him as an assassin.

The Answer told Kingpin his theory on why Silvermane was not truly dead, and then the Kingpin's agents managed to revive him. The Answer applied a collar on Silvermane's neck to force his compliance. Silvermane's test was a success in that he managed to overpower Spider-Man, but he lacked subtlety and attracted a large crowd in the process.

When Silvermane went crazy and out of control, the Answer figured that he was seeking Dagger, whose energies had incapacitated him before, and which held a connection to his life force. He also thought that the energy manipulated by Dagger might be able to revive the comatose Vanessa Fisk. The Answer made arrangements to set a trap to attract Cloak and Dagger. The plan worked and the Answer swooped down in the middle of a struggle between Cloak and Dagger, Silvermane, Spider-Man and the Black Cat, and flew away with Dagger.

The Answer brought Dagger to the Kingpin, but they found she was too depleted to save Vanessa, as Silvermane was draining them off via their connection. As the rampaging Silvermane followed Dagger to the Fisk Tower, Kingpin decided to use Dagger's energies anyway, knowing that it might kill her. Cloak arrived to free Dagger, but he too had been weakened by Dagger's energy deficit and the Answer managed to drop him with a single punch. As the Kingpin was trying to stop Silvermane, the Answer found out that Dagger had to return the energy she had taken from Silvermane in order to break the link between them. Dagger was too weak so the Answer infused her with his own light energy. This process went wrong and the Dagger absorbed all of Answer's life force, apparently killing him. The energy did break the link with Silvermane. Dagger then refused to give any energy to the wife of Kingpin and instead restored her partner, Cloak, and the two teleported away.

The Kingpin lamented the loss of his loyal agent, and the failure to revive Vanessa. He blamed the interference of Spider-Man and the Black Cat, and vowed vengeance. The Answer did not die, but rather was left as a discorporated, unconscious being of energy. However, the "implosion of the Multiverse Matrix" caused an energy disturbance that restored the Answer to awareness.

Seeking the answer to his current existence, he discovered a way to communicate with the corporeal world using a computer chip, formerly used by Doctor Octopus to control his adamantium arms. The two of them made a deal with the Answer promising to free Doctor Octopus from his prison and restore his mechanical arms, in exchange for helping him regain his physical form. Their plan revolved around a nuclear blaster, which was then stolen by the Sinister Syndicate.

Octopus thought up a new plan, in which he duped the scientist Guardsman into creating the machine which restored the Answer to life. The Answer sought to betray Octopus and leave him trapped, but Octopus maintained their former mental link and forced the Answer to free him.

Doctor Octopus built himself a temporary set of arms and then proceeded to recreate his precious arms. The Answer recovered the computer chip for the adamantium arms. He had to fight off Spider-Man and a squadron of armed Guardsman trying to protect the chip. When Doctor Octopus had rebuilt his arms, he tried to kill the Answer, but the battle was interrupted by both Spider-Man and Swarm.

Octopus escaped the struggle and returned to one of his labs to recreate his adamantium arms, but the Answer tracked him there. The Answer finally managed to create an interference field that neutralized their mental link, and the two fought on an equal playing field. However, while the Answer's powers were divided between the interference field and directly engaging Octopus' temporary arms, Dr. Octopus managed to nail him with his recreated previous arms. The Answer was granted a reprieve when Octopus' pawn, Mr. Hargrove, arrived and tried to take vengeance for his manipulations. Octopus stopped Hargrove, but then fled as the police drew near, leaving the Answer defeated, but alive. He was presumably taken into police custody and imprisoned in Ryker's Island. At the Ryker's Island Breakout he was one of the escapees.

The Answer began to rob banks with an unnamed sidekick in order to impress the Owl, then current ruler of New York's underworld. He managed to get the Owl's attention, and was waiting in a bar with his sidekick before phoning him back, but was confronted by Toxin, the heroic Symbiote, and Toxin told the Answer that if he gave him the answer to his problem, he would let him walk away. Toxin revealed to the Answer that he was a former police officer bonded to a symbiote, and that he couldn't seem to keep the symbiote from misbehaving, and that it was bringing out the worst in him. The Answer told Toxin that the solution was to kill himself. Toxin didn't keep his word, and sent the Answer back to the Raft. Toxin did attempt suicide, as per the Answer's solution, but the symbiote saved him.

He had a brief romantic liaison with Ruby Thursday at some point in the past, to which she called an end. She recently approached him and asked him to fetch A.I.M.'s procurement budget for her, which he did. Soon afterward, word got to him that Bullseye was out to assassinate him, but he later discovered that Bullseye was actually hired by A.I.M. to assassinate Ruby instead, and wanted to get to her through him. Bullseye decapitated Ruby, but he let the Answer keep her head. The Answer went into hiding to search for a way to reactivate her head.

His powers are usually the answer to whatever he needs at a moment. At rest, he may not demonstrate any superhuman powers. During a fight, however, he can develop superhuman strength, speed, durability, flight, formation of force fields, heightened senses etc..

The Answer is also highly intelligent and able to mentally determine the answer to a number of problems without the use of his powers. He can analyze scientific, physical and legal data and discover solutions much more quickly than average humans.

His costume has been created to fight with Spider-Man, so the webs will not stick to him. 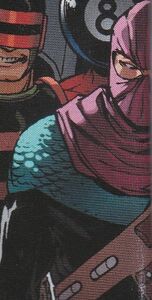