Kill David Webb/Jason Bourne in revenge for exposing Operation Blackbriar which led to his capture and torture.
Murder Aaron Kalloor and Heather Lee (both failed).

The Asset is the secondary antagonist of the 2016 spy action thriller film Jason Bourne, the fifth installment of the Bourne series.

He is an ex-member of Operation Blackbriar and a professional assassin who was sent to kill Richard Webb and later his son, Jason Bourne, whom the Asset had sought to kill in revenge for exposing Blackbriar - which led to him getting tortured by the terrorists with whom he had previously affiliated. Because of this, he is arguably considered as the secondary antagonist of the entire Bourne film series.

He was portrayed by Vincent Cassel, who also played Philippe LaRoche in Derailed, Jean-François de Morangias in Brotherhood of the Wolf and Monsieur Hood in Shrek.

Sometime before the events of the movie, the Asset assassinated Richard Webb (Jason's father) via car bomb under orders from CIA director Robert Dewey.

When Bourne exposed the program Blackbriar, the Asset, who was working as one of the program's agents, was captured and tortured by the terrorists whom he had infiltrated. The CIA took two years to free him from this. After that, he held a grudge against Bourne for all of this.

In 2016, the Asset is summoned by Dewey to hunt down former CIA operative Nicky Parsons. Initially reluctant, he agrees upon learning that Bourne is with her in Athens. He leaves to carry out the task after executing the owner of a house which he had infiltrated. In Athens, the Asset tracks down Bourne and Nicky during a citywide riot and peruses them across the city until he crashes his vehicles. He heads up to a strike-point in a bid to find them, killing three rioters along the way. Eventually, after managing to get a shot of the pair in a motorcycle, the Asset shoots them - wounding Nicky and nearly killing Bourne. As the authorities respond to the Asset's gunshot, he is ordered by Heather Lee - the head of the agency's Cyber Ops Division - to retreat immediately, to which he refuses as he becomes determined to kill Bourne. Dewey responds by giving him 20 seconds to fire a last shot, which he does when he spots Nicky moving - shooting and killing her.

The Asset then leaves Athens and takes refugee in London, where Dewey orders him to eliminate Heather's team so that he may proceed to hunt down Bourne. He does this when Heather and Bourne are both led to Malcolm Smith, an ex-Treadstone surveillance operative. After getting briefly distracted by Bourne pulling a fire alarm, he eventually confronts him just as he's interrogating Malcolm over the circumstances behind his father's death; Bourne spotting the Asset causes him to realize that he killed Webb under Dewey's orders. The Asset then shoots Bourne and Malcolm, killing the latter and wounding the former - who once again escapes when the Asset fails to get a shot on Bourne.

Later on, the Asset travels to Las Vegas when Dewey is scheduled for a public conference with his consociate Aaron Kalloor. When Aaron gradually attempts to expose the truth about Dewey's latest project - the Iron Hand program - the Asset is instructed to eliminate him as well as Heather after Dewey discovers that she is conspiring with Bourne against him. However, as the Asset gets a shot on Aaron, Bourne appears and activates a light which he uses to blind the Asset - causing him to mortally wound Aaron instead of killing him, which causes panic as Bourne directing gunshots as the Asset prompts the crowds into rushing out of the building. The Asset leaves in disguise as a S.W.A.T. member, dispatching of the security and S.W.A.T members along the way; due to the Asset leaving the building, he is not present nor aware that Dewey would be killed by Heather after saving Bourne, who then leaves the building also to confront the Asset. As the Asset leaves the building, he is spotted by Bourne and the pair have a car chase across the city that ends with the Asset crashing into a casino. He abandons the S.W.A.T. vehicle and attempts to escape when fleeing into the sewers, only to be tackled by Bourne. They engage in a hand-to-hand brawl in which Bourne gets the upper hand, until the Asset comes across a whip which he uses to brutally beat Bourne - berating him for betraying the CIA as he strangles him. However, Bourne quickly overpowers the Asset and ends up snapping his neck, killing him and avenging his father, Nicky and Malcolm. 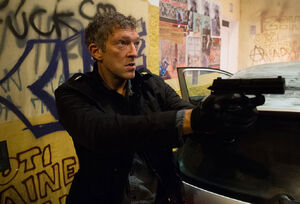 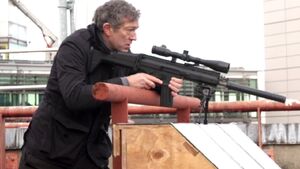