The Splits start out as goofy, happy go lucky mascots who star on The Banana Splits Show. When young Harley Williams and his family attend a taping of the show for Harley's birthday, the mascots overhear the director of the show tell Rebecca, the producer, about the show's cancellation, and they embark on a killing spree out of revenge. Bingo only got Austin and Beth as they tried to save Austin from Bingo after he falls down on the ground. Drooper kills co-worker Stevie by shoving a lollipop prop down his throat and Fleegle kills Thadd by sawing him in half. Fleegle and Drooper make Rebecca and Parker's father go on a slippery obstacle course, while Drooper films the action. Rebecca slips, spraining her fingers, and Parker's father slips and lands on his face. When they make it to the end, Fleegle stabs Parker's father with the blue key, and pushes him off the top, killing him, and when Rebecca lands in the ball pit, Drooper smashes her head with his hammer, killing her.

While looking for a way out, Harley, Zoe, and Parker come across Snorky. Harley attempts to convince him to help them, Snorky redeems himself and agrees to help them. They come across the Banana Splits "entertaining" imprisoned children by committing gruesome acts, such as maiming Stevie's corpse and ripping off Andy's limbs. Snorky chains the survivors as well, but secretively gives Harley the keys to set everyone free. The Splits chase after them, where Fleegle and Drooper attack and overpower Beth. Austin kills Fleegle by impaling him through the head with a metal pole and Harley tosses explosive confetti to Beth, which she uses to kill Drooper by shooting him through his mouth.

Bingo is an orange gorilla wearing shoes, a pair of white sunglasses and yellow west. 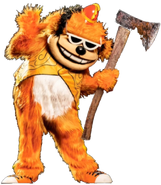 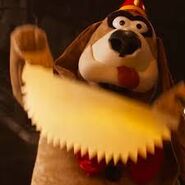 Retrieved from "https://villains.fandom.com/wiki/The_Banana_Splits?oldid=3406007"
Community content is available under CC-BY-SA unless otherwise noted.