The Splits start out as goofy, happy go lucky mascots who star on The Banana Splits Show. When young Harley Williams and his family attend a taping of the show for Harley's birthday, the mascots overhear the director of the show tell Rebecca, the producer, about the show's cancellation, they embark on a killing spree out of revenge. Drooper kills co-worker Stevie by shoving a lollipop prop down his throat and Fleegle kills Thadd by sawing him in half. Fleegle and Drooper make Rebecca and Jonathan go on a slippery obstacle course, while Drooper films the action. Rebecca slips, spraining her fingers, and Jonathan slips and lands on his face. When they make it to the end, Fleegle stabs Jonathan with the blue key, and pushes him off the top, killing him, and when Rebecca reaches the end of the course, Drooper smashes her head with his hammer, killing her.

At the exit, the survivors are ambushed by Bingo, declaring that time was almost up. Snorky attempts to fight Bingo, only for Bingo to stab Snorky and rip his heart-like core out. Before Bingo is able to kill Harley and his family, Snorky uses the last of his energy to rip Bingo's head in half before succumbing to his wounds. However, this would not be the end of the Splits, as Poppy takes off with their corpses on the Banana Buggy, having gone insane from Thadd's death. Fleegle's eyes light up and a distorted laugh comes from the animatronic.

Bingo is an orange gorilla wearing a pair of white sunglasses, yellow vest, and reddish-orange chucks. He has small dead-looking eyes, black hair, and a toothy grin. Despite not being the leader of the Splits and not appearing a lot in the film, he is sometimes considered the film's primary antagonist out of all the others. He gets killed by Snorky protecting Harley.

Fleegle is a light brown dog wearing a large red bow tie and two black buttons. He has black circles around his eyes, a white snout, hairless feet, and his tongue is always sticking out, giving him a lisp. He is the leader of the Banana Splits, and parts of his costume get torn off throughout the film, revealing the terminator-like endoskeleton underneath.

Drooper is a brown lion with a red nose and wearing a pair of yellow sunglasses, and white spats on his feet. He has a dark brown mane, and the tip of his tail is yellow. In the cover art for the home video releases, behind the scenes feature, and one of the eBay images, he has sharp and rotten teeth, though they are not seen anywhere in the film. 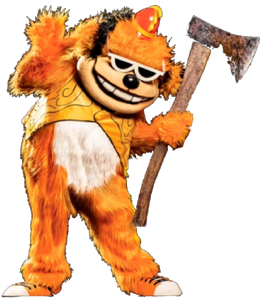 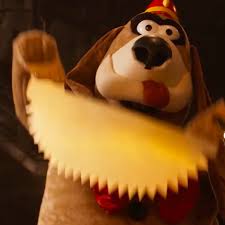 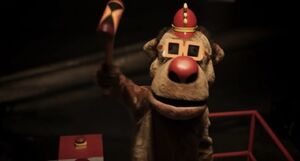 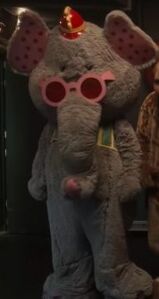 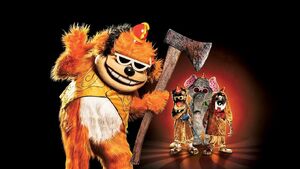 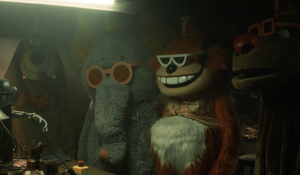 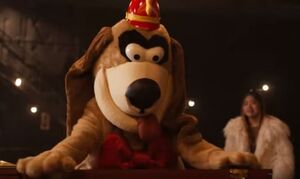 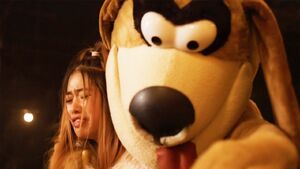 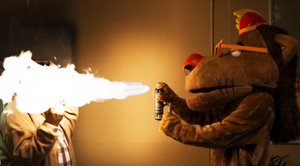 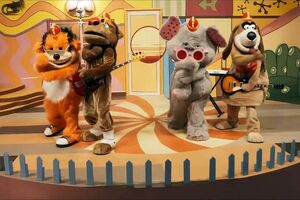 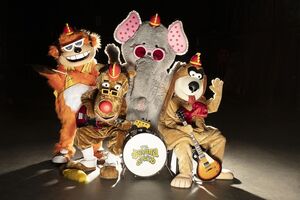 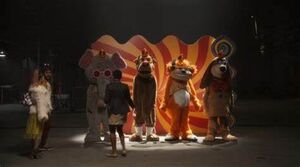 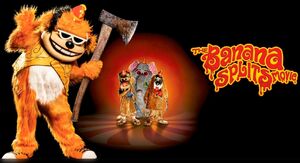 Retrieved from "https://villains.fandom.com/wiki/The_Banana_Splits?oldid=3567339"
Community content is available under CC-BY-SA unless otherwise noted.