The Batman Who Laughs

Assist Barbatos in in his plans to plunge the entire Multiverse into darkness.

The Batman Who Laughs is a supervillain in the DC Comics universe. He is a "Jokerized" version of Batman who originated from the Dark Multiverse. He is the team leader of the Dark Knights and their goal is to help their master Barbatos plunge the Multiverse into complete and utter darkness. This course of action makes them enemies of the Justice League. He serves as the secondary antagonist of the event Dark Nights: Metal.

The Batman of Earth -22 was drugged and captured by the Joker who went on to destroy Gotham City. The Clown Prince Of Crime killed Batman's entire rogues gallery, murdered Jim Gordon by dissolving him, set the city alight by blowing up various buildings, and had his goons line up families so he could kill the parents and infected their children with Joker toxin, all in front of Batman. The Caped Crusader eventually managed to break free of his bonds in a murderous rage and brutally beat the Joker before snapping his neck, killing him.

Two days later, Batman explained to Superman that the reason Joker went so far was because he was dying from the chemicals that transformed him many years ago. However, although Joker succeeded in making him break his “one rule”, Batman refused to let that turn him into a monster like the clown wanted. With the GCPD and Arkham Asylum in ruins, Superman had the “Jokerized” children quarantined at S.T.A.R. Labs while Batman returned to the Batcave to begin running some tests.

Three days later, the whole Bat Family besides Robin were in the Batcave going through some very vigorous training. Nightwing knew that something was troubling Batman and the Dark Knight revealed that he was exposed to a new strain of nanotoxin that had been inside the Joker’s heart and was released when Joker was killed. The toxin slowly rewrote Bruce's mind to become more like the Joker's, which lead the Bat Family to deduce they were training to fight Batman. However, Batman claimed that wasn't why he bought them to the cave before suddenly branching a pair of rifles and shooting them all dead.

One week later, Batman had almost killed the entire Justice League aboard the Watchtower except for Superman and his family. Batman told the Man Of Steel that he intended to use all the weapons they have confiscated over the years just because he wants to, since he no longer feels he has to hold himself back anymore. Superman responded that the world would rise up to stop him, but this claim just added to Batman's amusement. The Bat then revealed his new family of Jokerized Robins, among which was his son Damian Wayne, before exposing the Kryptonian to Black Kryptonite, causing him and his son to kill Lois Lane in a berserk state before dying themselves as part of the side effects.

Eventually, the world fell to Batman after he brought down all manor of opposing forces, ranging from armies to gods. Bruce believed he could not sink any lower until he met Barbatos, who showed him the nature of the Dark Multiverse and the existence of the central Multiverse above it. Batman was then tasked by Barbatos to locate his counterparts on other Earths to form a group of Dark Knights, which he will lead as The Batman Who Laughs, and aid in the deity’s conquest of the central Multiverse.

The Batman Who Laughs appears when Barbatos sends him to bring the Red Death of Earth -52 as a member of the Dark Knights, informing him that he could make a home for himself including the other former superheroes of the Dark Multiverse into the multiverse. After they defeat Cyborg in the Watchtower, The Batman Who Laughs elaborated the reason they were summoned into and it was due to a great ringing and that they were needed there to help save the world.

After Barbatos and the Dark Knights arrive on Prime Earth thanks to the Court of Owls, The Batman Who Laughs takes control of Gotham and rules over it from Challengers Mountain. In order to cause chaos, The Batman Who Laughs gave unique cards made of Cosmic Metallurgy to several enemies of Batman. They were The Riddler, Poison Ivy, Mad Hatter, Bane, Mister Freeze and Firefly. The cards the supervillains received allowed them to manipulate reality itself. Due to this advantage, they take over and ruled over different sections of Gotham.

The Batman Who Laughs later confronts Superman, who alongside Wonder Woman escaped their imprisonment on the giant tower in Metropolis, and explains that although he is Bruce Wayne, he decided it was better to let Arkham's inmates rule the city. Superman tries to get him to see reason but to no avail when The Batman Who Laughs tells him that his version of Superman said the same thing before he murdered him and his family. While The Devastator fought Superman, The Batman Who Laughs explained how each world in the Dark Multiverse is formed through the fears and hopes in the minds of beings from the Multiverse and uses Destroyer's history as an example. He also revealed that each member of the Dark Knights had killed their version of Superman (which could indicate Bruce's fears or his hidden desire). Superman tries to fight them but is unable to due the Dark Knights consisting of dark matter, making his punches ineffective. However, the Flash is able to save Superman before The Destroyer can kill him and they escape the Dark Knights by going through a portal.

The Batman Who Laughs along with the rest of the Dark Knights attacked the Oblivion Bar and killed Nightmaster. While the Oblivion Bar is burning, The Batman Who Laughs gets The Dawnbreaker to play a song on the jukebox and works despite it's on fire. As they are listening to the song, Superman breaks the barrier between the Phantom Zone and the Dark Multiverse, confident Kendra was wrong about it being a trap. When he takes stock of his surroundings, he sees a dark tower shaped like an S, in which Superman realizes at that point it was a trap. Then, three decrepit Supermen subdue him, and he hears someone ask him why he came which is then revealed to be Batman, who is almost completely drained of life. Superman explains that he got his message, but Batman reveals that the message he picked up was Barbatos deceiving him all along. The real message from him was actually hidden in the song from his last vision. The notes from the song "the Super Sons" played were ordered in the reverse of his emergency code as a warning not to come for him. As The Batman Who Laughs toasts over Superman's defeat, it's revealed that the final component needed to complete Barbatos' plan was the energy stored in Superman's cells. As Batman becomes engulfed in dark energy, he states that Barbatos was right about everything leading back to him in the first place, and that everything will now be submerged into total darkness.

The Batman Who Laughs with his card.

The Batman Who Laugh's appearance.

The Batman Who Laughs and Dark Robins.

The Batman Who Laughs looking over a Jokerized Justice League.

The Batman Who Laughs with his team the Dark Knights and master Barbatos.

Joker forces Batman (of Earth -22) to watch him kill the parents of many children over and over until Batman finally snaps. 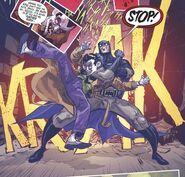 Batman laughs to a horrific act. A sign that he is beginning to lose his humanity.

The Batman Who Laughs gives Black Kryptonite to Superman and watches him kill his family.

The Batman Who Laughs sits upon a throne of corpses after bring an end to Earth -22.

Add a photo to this gallery
Retrieved from "https://villains.fandom.com/wiki/The_Batman_Who_Laughs?oldid=2459851"
Community content is available under CC-BY-SA unless otherwise noted.