The Beast (Doctor Who)

Physical inspiration of the Devil

Corrupt and destroy everything.

Rise and wage war against God.

The Beast is a demon that appears in the British sci-fi series Doctor Who, appearing in the episodes "The Impossible Planet" and "The Satan Pit".

It was voiced by Gabriel Woolf.

The origins of the Beast are a mystery, but it claims to have been born before the universe began and is the basis of every religion's concept of the Devil. What is known is that the Beast was captured by the Disciples of the Light and chained inside a pit deep within the planet Krop Tor, which was able to orbit a black hole without being sucked in. Its presence later seeped into the subconscious of all sentient beings to become the basis of the Devil-figure in all religions.

Encounter with the Doctor

When a Torchwood exploration group arrive to Krop Tor to discover what was preventing the planet from being pulled into the black hole, with the Tenth incarnation of the Doctor and his companion Rose Tyler appearing, the Beast saw its chance at freedom and possess the mind of Toby Zed and then the The Ood to serve as its Legion while making it seem that he left Zed's body. Managing to calm everyone down when the Beast preys on their insecurities, the Doctor has Ida rig up the loose cable, so he can explore the pit to find the Beast while the others manage to escape with Rose realizing that something is amiss.

Finding the Beast after detaching the cable to reach the bottom, the Doctor learns that Beast had transferred its mind into Toby's body to escape and that was chained was a demonic body that acts on base instinct. The Doctor realizes that the Disciples of the Light arranged for oxygen within the Beast's prison so someone can destroy the source of Krop Tor's artificial gravity to thwart the Beast's escape as its mind and body are still linked. As the Doctor destroys the gravity with the Beast's body screaming with Krop Tor is sent falling into the black hole, the Beast's mind with Toby violently reacts to the turn of events before Rose sends the demonic vessel out into space to be sucked into the event horizon, However, it claimed that the Beast's original body and spirit would never be truly destroyed.

The Return of the Beast

Far from being killed after passing through the event horizon of the black hole, the Beast found itself reconstituted and revived on the other side of the cosmos. It went to Earth where it assumed the form of Martha Jones and used the TARDIS' telepathic circuits to contact the Doctor. As Martha, it asked the Doctor if she could rejoin him in his adventures, but he refused. They were then chased to the TARDIS by the Cybermen, which were actually a psychic projection created by the Beast. There, the Beast revealed itself and told the Doctor that he would use his TARDIS to conquer time and space. The Doctor then asked the Beast to turn into Martha again, so it was small enough to push into the time vortex. The Doctor revealed that he knew all the time it wasn't her, because she would phone him as she didn't know how to use the TARDIS' telepathic circuits. It is unclear if the Beast survived in the time vortex.

The Beast was a narcissistic and overconfident demon that constantly exalted itself and its achievements and referring to itself by variously magnificent and grandiose epithets. It was exceedingly pompous and rude when it dismissed all other creatures as its inferiors and believing itself invincible. The Beast was also quite emphatic about its own importance in the mindsets of other life forms, asserting itself as all of the devils in existence, "the truth behind the myth".

In addition to being very arrogant and egotistical, the Beast was also a destructive and ferocious monster. The Beast had an extremely cunning and manipulative nature, and it was proud of the acts that it set into motion, laughing when the Tenth Doctor deduced its plans to escape Krop Tor. The Beast would even sadistically prey on people's tremendous fear and guilt to shake them and leave them feeling vulnerable. The Beast was also able to see into the future, so it used this precognitive insight against others, foretelling twisted interpretations of what would befall them, with enough truthfully preserved in his statements to keep them plagued with dread.

The Beast could manifest itself through electronic media, including computer voices and hologram viewers. Its mind could leave its body and possess a single hive mind of the Ood collectively and/or a single human individually. It had the power of telepathy and, through a host, telekinesis. Possession of a human subject affected the host's skin, causing strange markings to appear all over their face and body; and vocal cords, allowing them to speak at different pitches simultaneously. Whether a single human or a hive mind, the eyes of those possessed by the Beast glowed a fiery red. The Beast could also project fire from his mouth, as could its possessed hosts. Its hosts could also physically survive in a vacuum. The Beast's existence seeped into the subconscious of all sentient beings across the universe, becoming the basis of the Devil-figure in all religions. Although defeated by the Doctor and Rose, the Beast claimed that it could never be destroyed as the thought of it would live on. 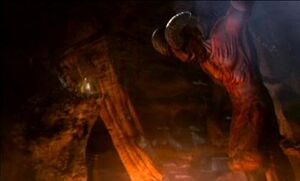 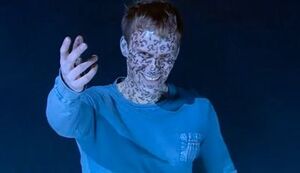 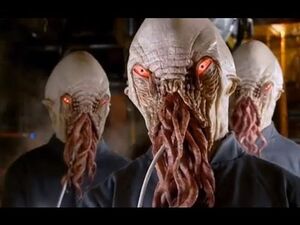 The Beast possessing the Ood 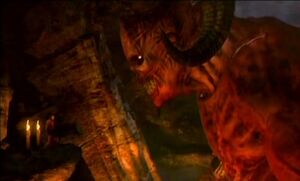 The Doctor and the Beast 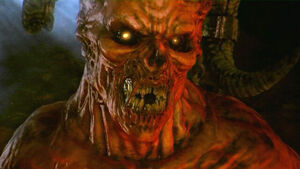 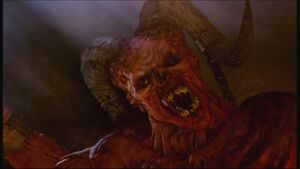 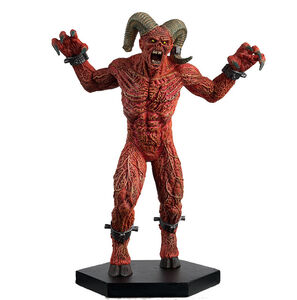 A Figure of the Beast's full body. 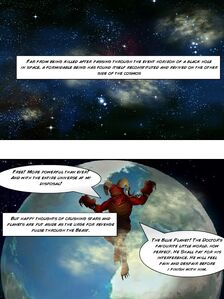 The Beast returning in the Webcomic "The Beast is back in Town" (Note his feet are not hooves).