Bestowing powers upon others

To conquer and enslave planets.

To take over Krull.
To kill Colwyn and take over the entire universe.

The Beast is the main antagonist of the 1983 British-American cult classic sci-fi/fantasy film Krull. He is a giant monstrous alien who commands an enormous, apparantly unlimited army of Slayers and Changelings. It is said at the beginning of the film that The Beast has conquered and enslaved many worlds. He resides in the Black Fortress, his massive space-traveling abode, which can land on planets and release his army to do his bidding.

He was voiced by the late Trevor Martin.

Little is specifically known of The Beast's past other than his dealings with the Cyclops race that now live on the planet Krull. The Cyclops race used to possess two eyes, like ordinairy men, and they lived on the same world as The Beast. He made a deal with their race, removing one of their eyes for the ability to see into the future. But the Cyclops race were tricked, and the only thing they were permitted to see was the time of their own deaths. Their race moved planet, to Krull. It is said that the ability to bestow powers such as sighting the future is a natural talent of The Beast's race, yet they cannot bestow powers upon themselves. The dealing with the Cyclops race was an experiment in changing their internal chemistry to allow them to gain the abilities they could give others.

What is known about him is that he landed on the planet Krull in his Bladk Fortress, and released his Slayers and Changelings across the land. The Beast knew that if he burned a few towns and settlements all Krull would see him as their ruler. His Slayers captured Lyssa, bride-to-be to Colwyn, a young prince, and murdered both their families and decimated their armies. Colwyn allied himself with many men to save Lyssa, travelling to the Black Fortress with the magical Glaive, an ancient throwing weapon. The couple eventually destroyed The Beast with first the Glaive, then the power of their love, manifested as a powerful flame. The Black Fortress then exploded, ending The Beast's reign of terror on Krull once and for all.

The Beast is shown as a powerful shapeshifter, who can assume any form he or anyone else chooses. The forms are not perfect imitations, however. The Beast's red eyes appear in place of the form's natural eyes. He can also produce fire from various parts of his body, such as his hands and mouth, and make various items appear in thin air. He also has the ability to create portals to other places, which he can look and travel through. He is also supposedly omnipotent, and can bestow abilities upon others, but not on himself. 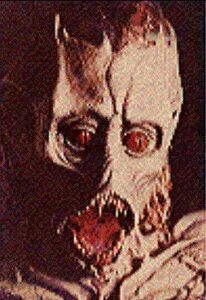 Add a photo to this gallery
Retrieved from "https://villains.fandom.com/wiki/The_Beast_(Krull)?oldid=4219904"
Community content is available under CC-BY-SA unless otherwise noted.