The Beast
The Monster of Fire Mountain
Mutant Monster (by Dusty)

Speckles the Tarbosaurus 2: The New Paradise

Become strong enough to leave the volcano and wreck havoc on the world (heavily implied; failed).

The origins of this monstrous creature are shrouded in mystery, though it is implied he may be an alien, as the Dsungaripterus describes him as "not of this world". The Beast resides in a massive cave deep within a soon-to erupt volcano, where he grows in size and strength from the lava and raises his three sons. At some point, he gains the servitude of a pack of Deinonychus, having them bring young dinosaurs to the cave as "toys" for his offspring.

After Speckles and his friends arrive in the cave and fight off the Beast's offspring, the Beast himself appears, towering over them and attacks them. Speckles and Fang fight the Beast, using their superior agility to avoid his massively powerful claws. Eventually, the Beast's careless knocking over of the cave's pillars causes the cave to collapse, trapping the giant lizard under a pile rubble and causing the volcano to erupt prematurely, but not before he nearly kills Junior. However, the Beast emerges from the flowing lava, roaring in rage and pain, and prepares to attack the dinosaurs again. Speckles tricks the Beast into diving at him, jumping out of the way at the last moment as the Beast crashes into the wall, causing it to collapse and allowing Speckles and his friends to escape the cave into the sunshine. What happens to the Beast is unknown, as it disappears immediately after diving at Speckles.

The Beast is a giant, hideous iguana/dragon-like creature with greenish scales, red eyes, razor-sharp sharp teeth and claws, and spikes along his head and back, two of which on his head are larger than the rest. He is of epic proportions, being at least twenty times larger than a full-grown Tarbosaurus.

Not much is known about the Beast's personality, as he only appears in one scene. However, he is shown to be vicious and aggressive towards those who trespass in his lair. It is also implied that he is cruel and sadistic, as he gives living baby dinosaurs to his own offspring both as playthings and food. However, this also shows that he cares for his children.

The Beast appears to be fireproof, as he was able to come out of molten lava with no signs of injuries. He is immensely strong and powerful, being able to knock over stone pillars just by walking into them and send a full-grown Tarbosaurus flying with a single swipe of his claws. He is also surprisingly fast and agile despite his massive size, although he can be clumsy in tight spaces. 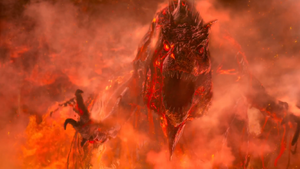 The Beast emerging from the lava. 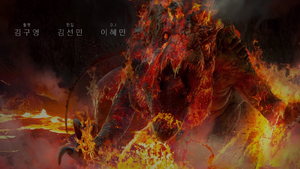 The Beast as seen in the End Credits.
Add a photo to this gallery

Retrieved from "https://villains.fandom.com/wiki/The_Beast_(Speckles)?oldid=3765763"
Community content is available under CC-BY-SA unless otherwise noted.