Villains Wiki
Register
Don't have an account?
Sign In
Advertisement
in: Articles under construction, Demon, Liars,
and 21 more

NOTE: This article is about the False Prophet. You may also be looking for the related figure of the Antichrist.

The Beast is a prophetic monster (or, more accurately, a demon) that appears in the Abrahamic religions.

Not much is said about the False Prophet's appearance in Book of Revelation, except that he has two lamb horns and the voice of a dragon.

The Beast appears in the Biblical scripture of Revelations, ad although its name is often believed to be one and the same with Satan and the Antichrist, this creature is a different entity. Known as the False Prophet, which is also referred to as the "Beast of the Earth". However, much like the Holy Trinity, these three demons are sometimes considered three parts of a negative higher-power known as the Unholy Trinity, which together shall oppose the armies of God during Armageddon and bring great misery to humanity until their ultimate destruction on Judgement Day.

The Beast is symbolized as an apocalyptic monster that shall rise from the sea with seven heads, one of which shall be mortally wounded via trickery. The Beast shall heal its wounds and be worshiped as a god amongst people, performing many miracles and leading many astray in a similar manner to the Antichrist himself. At the height of evil's power during the Apocalypse, all humanity will be forced by the False Prophet into receiving The Beast's number etched onto their right hand or forehead in order to purchase food or contribute to society, and traditionally, this number has been noted as 666. The False Prophet will also make an image resembling the Beast of the Sea, and breathe life into it, so that it may speak and order to kill anyone who doesn't worship it.

The Beast, alongside the Antichrist and Satan, will have the power to decimate the world and bring calamity to humanity - those who put their faith in God shall be spared the suffering of the others (according to some traditions) while others will have to live through the End Times.

However, after an undisclosed period of time, the world shall be saved from this tyranny when God personally intervenes, casting the Beast alongside the Antichrist into a pit of eternal fire, where Satan and all other evils will be thrown as well a thousand years later, destroying them forever and bringing peace to the world for eternity.

The Beast of the Earth is the name of the Dabbat al-Ardḍ (in Arabic: دابة الأرض), another prophetic and monstrous figure, (or, more accurately, a demon) in Islamic tradition, and it will be one of the signs of the coming of the Last Day. This creature will appear after the sun arises in the west. The phrase appears in the Qur'an, in Sura An-Naml. The term also appears in the hadith, which expands upon the activities of the beast. The Qur'an mentions that the Beast will address the unbelievers and admonish them for their lack of attention towards God. The following is the purport of the Qur'anic verse that has been discussed:

The Beast is mentioned to have the Staff of Moses and the Seal of Solomon. It will strike the face of the disbelievers with the staff, "He is destined for Hell" will be written on his forehead, and his face will blacken and it will brighten the face of the believer with the Ring of Solomon and "He is destined for Paradise" will be written on his forehead.

As it is seen, when the Beast emerges, people will start to believe, but belief will not be accepted anymore because of the emergence of the major signs. 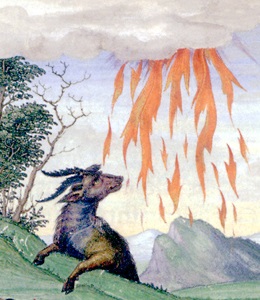 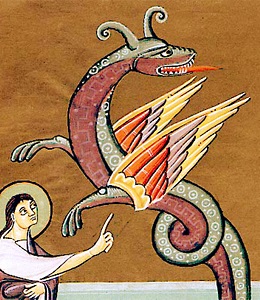 The Beast of the Earth 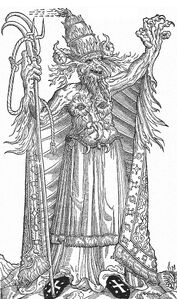