The Beast of Darkness

Endlessly egging Guts to give into his rage.

Overtake Guts' body and mind and drive him to his eventual destruction.

The Beast of Darkness (闇の獣 in Japanese) is a manifestation of all evil, rage and bloodlust from Guts' inner self after Griffith's betrayal and the Eclipse event and is the secondary antagonist of Berserk.

From both events, Guts suffers dissosiative personality disorder where the Beast of Darkness inside him borns, and constantly attempting to take over his mind as Guts wore the Berserker Armor for the first time through the fetish, granting him unnatural strength and ferocity at the expense of his health.

The Beast of Darkness is aggressive, cold and cruel creature with an unsatiable battle lust. It is also shown to be a bit cunning and manipulative, as it urges Guts to closer with his comrades so should he suffers their loss, it can took over his mind. As an amalgamation of the swordsman's malice, it relentlessly attempts to overtake his mind. Like Guts, the Beast also bears a strong hatred for Griffith, ultimately desiring the White Hawk's demise and describing him as "the true light that burns (me)".

During Guts' two year warpath of blood and carnage following the Eclipse, the Beast's presence grows parallel to the swordsman's malice.

The Beast first makes its debut at the end of Conviction Arc. Sometime after defeating Rosine (who later succumbed to her wounds inflicted by Guts), restless spirits surrounding Guts manifest as the Beast, taunting him about his destructive actions and divulging the origins of the entity, as his inner darkness personified. The spirits foreshadow Guts' eventual subjugation to it, proposing that he too can become a monster, similar to Griffith. Guts, heavily wounded and exhausted from his confrontation against Rosine the Apostle, collapsed and lost his consciousness. The malicious spirits then attempted to take over Guts but he was saved by Puck.

In Godo's mine, as Guts is plagued by his past and begins accepting his growing darkness, the Beast reminds him, "The blood must flow," urging him to continue killing to sate their bloodlust.

Falcon of the Millenia Arc

Pushed to his breaking point from protecting a mentally regressed Casca, Guts temporarily succumbs to the Beast's temptation and unleashes his lust on his companion. The struggler is driven by a vision of the Beast ravaging a bared Casca, as he begins gnawing at her breast. When Guts came to his senses, he is left shaken by his actions, terrified of what he might do if left unchecked and consequently accepting the fellowship of Farnese, Serpico and Isidro.

The Beast resurfaces when the swordsman dons the Berserker Armor during Apostles' assault on Flora's mansion. As the violent od of the armor begins to mesmerize and manifest Guts, it takes physical form through the fetish, warping the armor's helmet into the shape of its own lupine visage. Using the subjugated Black Swordsman as a conduit, it combats Grunbeld, decisively outclassing the apostle in its feral onslaught. Only by way of Schierke's astral projection into and reinforcement of Guts' subconscious mind is the Beast's hold on the swordsman relinquished. Up until now, The Beast was a thought-form. Now with Berserker Armor it has taken a external manifestation and unleashed from Guts' mind.

The Beast is able to possess the Black Swordsman's psyche on two following occasions: at the beach under the full moon when powers of magic are said to reach at their peaks where he and his gang came under attack by Pishacha and harbor of Vritannis when Pishacha forces at first attempted to assassinate leaders of Holy See Alliance but soon launched a full-scale invasion on the harbor when the assassination attempt failed. After repelling Pishacha and upon boarding the Sea Horse, Schierke etches a personal talisman on Guts' brand, restraining the Beast with ethereal chains (which are also symbolic representation of those who are dear to Guts). However, when Guts contracts a fever, he is still met by the Beast in a nightmare, who makes it known that the young witch's constraints cannot and would not hold it at bay forever. Unable to fully exert its influence, The Beast chooses to bide its time until the deaths of Guts' companions – for the moment when the swordsman is forced to resume their carnage and finally extinguish the burning light that is Griffith.

When the Sea Horse crew comes under attack on a remote island in the Western Sea by Sea God and its minion monsters (which are all parts of the creature's body), Guts gives in to the Beast again to combat his enemies; under its influence, the Black Swordsman is able to annihilate the attacking swarm of the Sea God's appendages. However, the time was a full moon and he thereafter once again sets his sights on his comrades (the first being at the beach during Falcon of the Millenia Arc. Stopped only when a mysterious, child-like apparition kept him at bay), with his own will only scantly impeding the compulsion of his inner darkness. Once again a child-like light appears to Guts in his subconsciousness, wherein it jumbles the Beast's hold and creates an opening for Schierke to again free the swordsman from the entity's sway. However, unlike previous times, The Beast's sway had to be forcibly wrestled off. Also in this Arc when Schierke's spiritual consciousness was forced off of Berserker Armor, she attempted to reenter inside the armor only to be repelled by Armor under the influence of the Beast, indicating that The Beast is also upgrading itself, making it become increasingly problematic for Guts and his gang.

In order to survive and escape the island that was under the control of Sea God, Guts and his party had to fight and kill the gargantuan monster. Guts would later don the Berserker Armor and utilize Schierke's spirit as a guidance to enter inside the body of Sea God, fighting off its minion monsters and parasites nourishing off Sea God inside its body and inadvertently acting as Sea God's lines of defence.

When Guts and Schierke's consciousness eventually reached Sea God's heart to kill The Sea God, it would prove to be an extremely difficult task: Not only it was heavily protected by monsters, it emits ultrasonic wave attack that totally incapacitates victims (mere sound of heartbeat would drive normal humans insane). Worse, the heart is also capable of independent thoughts. With Schierke's consciousness being forced out of Berserker Armor and Guts being crippled it seemed very bad for Guts. Fortunately Sea God's heart was temporarily incapacitated by Merrow's songs which are also capable of ultrasonic wave attack, Guts used that chance to summon the power of Berserker Armor once more and slicing off the Sea God's heart, killing the creature.

After finally arriving in Elfhelm, The Flower King of Elfhelm named Danaan treats Farnese and Schierke into Casca's thoughts in order to bring Casca back from her puerile state. In their journey into Casca's dream, Farnese and Schierke were allowed to bring magic items and fetishes to help them out. One of the fetishes Farnese and Schierke brought, was Berserker Armor. In this dream world within Casca, Guts was depicted as a wounded hound with a brand, one leg and eye missing and being chained to a casket that contains Casca's shattered doll form. The trio are to gather the missing fragments of Casca doll in an attempt to bring Casca back to her former self, fighting thought-form demons along the way. At the end of their journey, the last piece that holds the key to Casca's restoration, was guarded by a giant shadowy bird of prey resembling a hawk (with obvious reference to Griffith) with the ability to create Apostle-like monsters with its miasma. Sensing they are about to get overwhelmed, From inside Farnese's satchel erupts Berserker Armor (controlled by the Beast) that dashed with lightning speed towards badly wounded Guts-hound and engulfs Guts-hound turning the hound into feral beast with the Dragonslayer for its tail and cannon for its mouth.

After hacking his way through the dark hawk, the armored hound and the raptor face and confront each other, while Farnese and Schierke proceeds to retrieve the last piece of the Casca-doll's fragment that resembles at first the Demon Child later turned into a heart with thorny vines wrapped around it. Fortunately for Guts-hound the dark hawk and its miasma-based monsters disappeared into nothingness with the securing of the final fragment, as Guts was slowly losing his fight against the hawk. With all pieces completed, Casca was restored and Schierke and Farnese returned to reality. 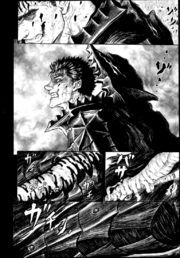 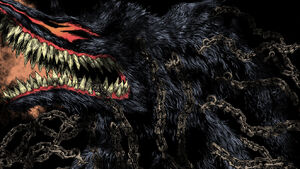 The Beast in chains which are symbolic representations of those who are dear to Guts. 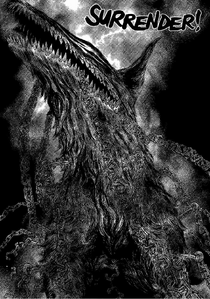 The Beast of Darkness demanding that Guts surrender to him, actually attempting a forcible takeover of Guts. 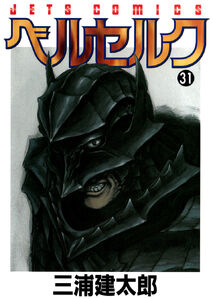 Guts wearing Berserker Armor not under the influence of The Beast. 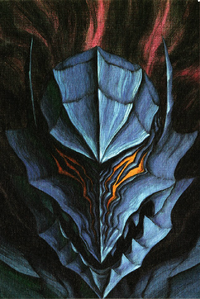 Guts wearing Berserker Armor under the influence of The Beast. 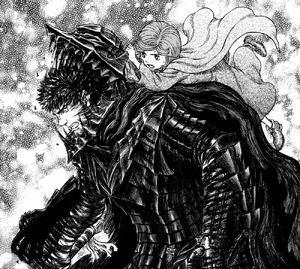 Schierke forcibly wrestling The Beast's control from Guts before it can completely possess him. 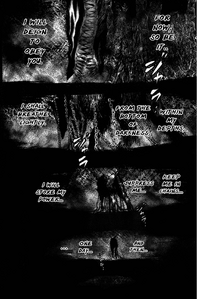 The Beast biding its time. 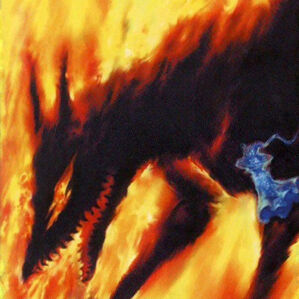 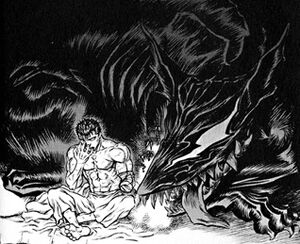 I am right besides you... Always, forever. 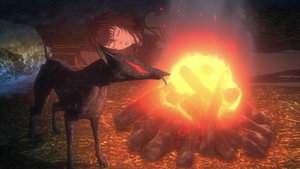 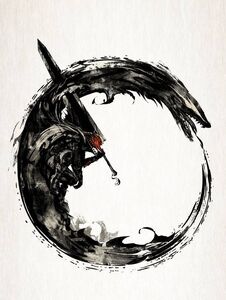 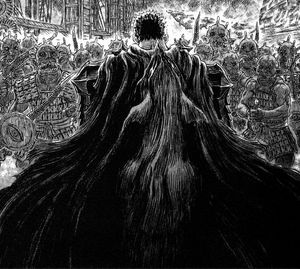 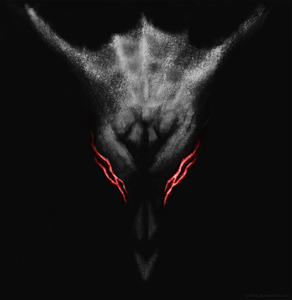 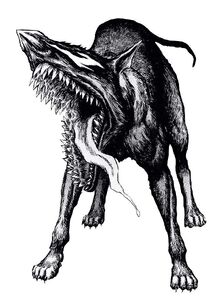 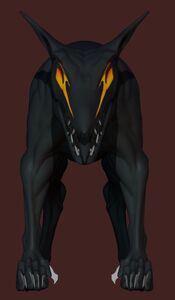 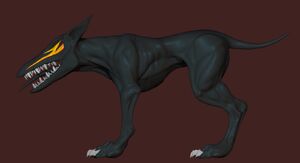 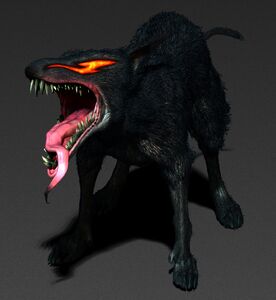 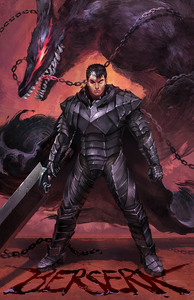 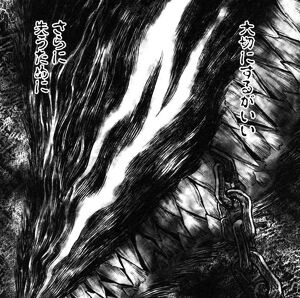 Think you can hold me off with these chains? 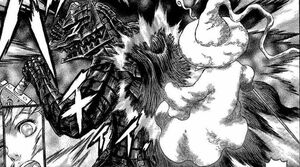 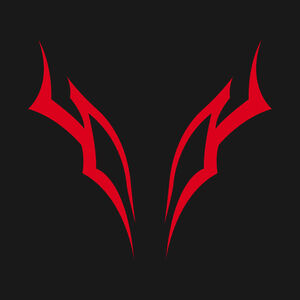