The Bensons are the secondary antagonists of Pixar's 21st feature-length animated film Toy Story 4, the fourth and final installment of the Toy Story film series. They are a group of ventriloquist dummies that reside in the antiques shop. They are commanded by Gabby Gabby.

They were all voiced by Steve Purcell, who also played The Cleric in Toy Story That Time Forgot.

At some point in the past, Gabby Gabby befriended the Bensons and, with their help, took control of the Second Chance antique shop.

During the events of the film, Woody and Forky are spotted by a Benson while they were searching the store for Bo Peep. Gabby Gabby introduces the Benson to them and ordered him to lift the toys into her stroller after she noticed Woody's pull-string. More Bensons soon appeared when Gabby made known her intention to take Woody's voice box for herself and gave chase when Woody and Forky tried to escape. One of the Bensons managed grab Forky before a girl named Harmony entered the shop and took Woody to a nearby playground, leaving Forky held captive by the Bensons. Woody decides to save him with the help of Buzz, Bo (whom he met), Giggle McDimples, Ducky and Bunny and Duke Caboom. However, they fail and no one wants to return except Woody. Then after he argued with Bo and his friends, Woody goes back to get Forky alone. He then encounters Gabby Gabby with the dummies and the doll arranges with Woody to give her his voice box in exchange for Forky. Woody manages to recover Forky and decides to leave the store. But Forky observes Gabby Gabby being rejected by the girl who was her only motivation to get Woody's voice box to play with her. Woody then tells Forky to bring the RV near the carousel while he convinces Gabby Gabby to come with them what she accepts. Together, with the help of Bo and her friends they leave the antique shop and the first Benson pushes the stroller with Woody and Gabby Gabby in it before he hops inside. But on leaving, the stroller hits a fairground barrier and falls to the ground. A lady runs to straighten the stroller and discovers Benson inside which makes her scream in fear. The Bensons were never seen or heard from again afterwards and it might be unknown if the Benson in the stroller was brought back to the antique shop.

The Bensons all look the same. They wear black suits with black bow-ties and black shoes. However, one of them does wear a red bowtie instead. 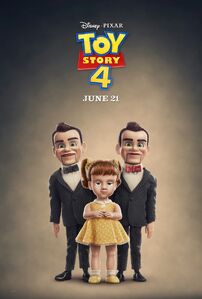 Film poster with Gabby Gabby and two of the dummies 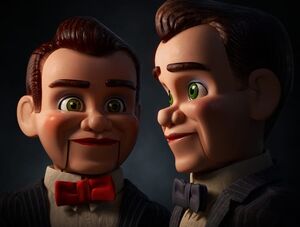 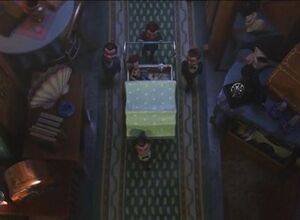 The Bensons encircling Woody and Forky 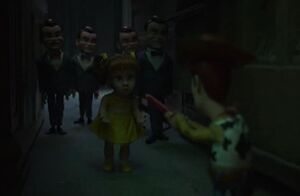 Gabby Gabby and the Bensons, trading with Woody 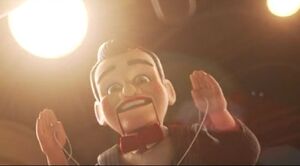 Benson helps Woody and his friends to escape 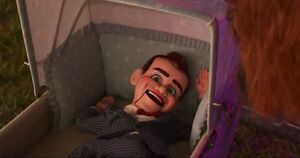 Benson found in the stroller by a lady, inadvertently scaring her