The Big Guy is the main antagonist in the 2011 British-American science fiction comedy film, Paul. She is the mysterious female superior to the United States Secret Service Agent, Lorenzo Zoil.

She is portrayed by Sigourney Weaver, who also portrayed Alexandra Reid in The Defenders, Warden Walker in Holes and the Director in The Cabin in the Woods.

Lorenzo Zoil arrived at the site of the crashed car and informs "Big Guy", over the radio that he is closing in on Paul, and she recommends using local law enforcement as back-up. She then recruits two inept rookie agents, Haggard and O'Reilly to aid in his mission, without informing them about the nature of their target.

Zoil assures the Big Guy he can handle the problem himself, but the rookies are employed anyway. Haggard spied on the conversation, and confronted Zoil with O'Reilly, causing them to be debriefed from the mission.

Later on the film, Haggard is killed, O'Reilly is incapacitated as Zoil is the last remanding agent pursuing the alien. Zoil assures the Big Guy that he will have Paul within the hour, but she declares herself tired of waiting, and informs him that she has ordered a military response. The Big Guy comes from an army helicopter to confront Paul, Graeme, Clive, Ruth and Tara at their rendezvous.

When Zoil arrives and reveals himself to be the inside contact who helped him escape the facility, The Big Guy shoots him in the shoulder when he disarms the men. She is punched by Tara, and later regains consciousness, and is immediately crushed by the arriving alien ship. 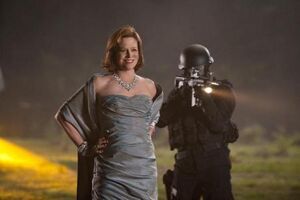 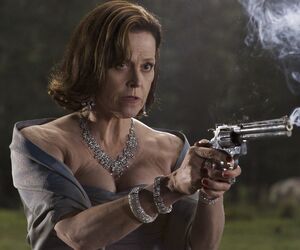 Retrieved from "https://villains.fandom.com/wiki/The_Big_Guy?oldid=3378500"
Community content is available under CC-BY-SA unless otherwise noted.