Be proud of himself and fool the Dude.

Jeffrey "The Big" Lebowski is the titular main antagonist of the 1998 film The Big Lebowski.

He was portrayed by the late David Huddleston.

The Big Lebowski is a millionaire who had been confined to a wheelchair since losing use of his legs in the Korean War. His first marriage produced a daughter named Maude. His wife had a great deal of business acumen which earned her a great deal of money. To keep Lebowski happy she and Maude gave him a generous allowance and allowed him to present the image of a wealthy and successful businessman.

After his wife passed away Lebowski married a young trophy wife named Bunny. Bunny quickly ran up a number of debts all over town, including to Jackie Treehorn. Treehorn sent his thugs to rough up Lebowski, however they went after the wrong Jeffrey Lebowski. They went after the unmarried and unemployed Jeffrey "The Dude" Lebowski instead of the married millionaire Jeffrey Lebowski. Assaulting the Dude in his apartment, one of the thugs then peed on his rug. The Dude went to Lebowski to seek compensation for his rug, however Lebowski brushed him off. The Dude then tricked Lebowski's assistant Brandt by saying that he could take any rug he liked, and took a rug given by Maude to his mother back to his apartment.

When Bunny disappeared her German nihilist friends took advantage of the situation by concocting a ransom scheme. Lebowski told the Dude that Bunny's life was in his hands and gave the Dude $1 million for The Nihilists. It turns that it was just a ruse to disguise his embezzling the million from his foundation and that there was no money in the briefcase to begin with. Bunny returned home a few days later, she had gone to visit friends and not bothered to tell anyone that she had left.

The Dude and his friend, Walter Sobchak, arrive at The Big Lebowski's mansion to tell him off. This ended with Walter thinking that The Big Lebowski was faking his disabilaty to walk, picking him up and dropping him to the floor. 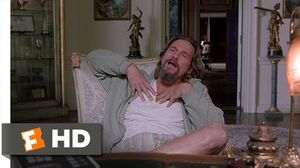 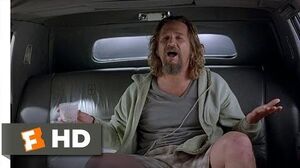 The Big Lebowski - She Kidnapped Herself Scene (7 12) Movieclips
Add a photo to this gallery
Retrieved from "https://villains.fandom.com/wiki/The_Big_Lebowski?oldid=3779973"
Community content is available under CC-BY-SA unless otherwise noted.