The Bikers (The Purge: Anarchy)

Capture people for the rich elite to bid upon as Purge victims (succeeded until the end of the film).

Chaotic Gangsters
Bikers are a group of major antagonists in action horror film The Purge: Anarchy.

True to the scare tactics typical of the Purge, the bikers are shown with grotesque masks or face paint. They are far more menacing by contrast to the Purgers under Polite Leader in the first film, however, due to their relentless pursuit, effective kidnapping, and, save for "GOD"'s explanation, their ominous silence. They demonstrate a formidable talent in tracking, constantly following the main group and later setting up an ambush as they attempted to jump the fence.

They pursue the protagonists Shane and Liz as they try to survive the night and escape through the city. Their actions, however, turn out to be, in some ways, worse than the Purgers who kill and destroy out on the streets.

Already conflicted by strains in their relationship, Shane and Liz drive quickly to get home before the commencement of the 2023 Purge. However, they are accosted in the parking lot by a group of bikers bearing horrific masks (or in the case of one, disturbing facepaint) that regard them ominously. As they drive towards the downtown area on the way home, their car loses its power steering, complimentary of the bikers that sabotaged it. The bikers, following an unmarked white van and seemingly led by a member bearing a mask with "GOD" on the temple, appear to them and instigate a chase throughout the city. Eventually, Shane and Liz cross paths with Leo, Eva, and Cali, and form a survivor group that manages to elude the bikers for some time.

The truth of the bikers' actions are revealed as the group watches a hapless man get cornered and then captured, tossed pleading into the white van, before they drive on. The group manages to escape a fatal shootout between conflicted members of Eva's friend's family and Big Daddy's death squad by hopping over a fence in an alleyway. Unfortunately, the bikers are waiting on the other side and ambush them. Leo and the others are kidnapped in the same manner as the unfortunate man they witnessed earlier. When Cali asks why they haven't killed them, "GOD" draws back his mask and reveals that they have no intent to kill them. The bikers capture people for the rich elite to bid upon as Purge victims, and then attempt to justify it by saying they needed the money. They are last seen getting paid and passing off Leo and his group to their rich employers, revealing the true villain the Old Elegant Woman. While Leo and his party, sans Shane who is fatally shot in the process, manage to survive, the bikers are never seen again. 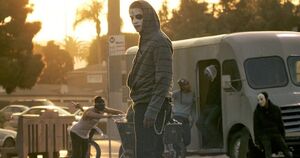 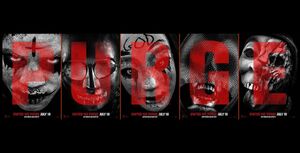