Seduction
Knowledge on chemicals and compounds

Shrinking women and dissecting them

The Biology Teacher is a minor antagonist in the 2019 horror musical tie-in film K-12 the partnering piece to the album of the same name by Melanie Martinez, as well as the titular main antagonist in the music video for the song Teacher's Pet. As his name suggests he is a biology teacher employed at K-12 Sleepaway school who enjoys grooming his female students in order to trick them into being shrunk and dissected.

He was portrayed by Marton Behr.

The teacher made his first appearance while Cry Baby and Angelita were in his class by slamming his hand on Angelita's desk to kill a beetle, startling her and those sitting near her, after the two make eyes with another they share seductive expressions with one another, unnerving Cry Baby. When he returns to his desk he finds that Angelita wrote on the bottom of her test "If I pass this quiz will you give me your babies?", he gives a lustful smile before putting a gold star on her paper much to her pleasure. Angelita then notices he left her a note under her books asking her to stay after class which she accepts. The teacher then puts a framed photograph of his family face down on his desk before making advances on Angelita.

He takes her to the front of the class and while she's looking around at some of his past experiments, he takes the opportunity to take a lollipop out of a box on his desk, before stirring it inside of some kind of compound. He then offers it to Angelita, after she takes a lick of it however she shrinks down dramatically, before falling into the teacher's hands.

While laughing maniacally he prepares to dissect her, having trapped her in a mucus like substance. Thankfully however Cry Baby came back into the classroom, having grown worried and upon seeing what he was doing, forced the knife out of the teacher's hand before rag-dolling him across the room with her telekinesis.

He backs into the corner of the room, whimpering and cowering in fear, before having his throat slit by Angelita killing him.

The teacher was a charismatic and seemingly friendly man, however this was only an act to disguise his true nature of being a sadistic psychopath with a bizarre obsession with dissecting women. He was also quite cowardly as he deliberately preyed upon those he knew were more vulnerable than him.

The teacher was a tall and handsome man with fair skin and short brown hair and a neatly trimmed beard. He wore a grey two-piece suit comprised of grey slacks and a grey waistcoat with pointed lapels alongside a white frilly shirt. 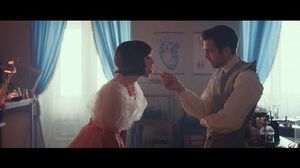 Retrieved from "https://villains.fandom.com/wiki/The_Biology_Teacher?oldid=4219855"
Community content is available under CC-BY-SA unless otherwise noted.