Salesman of Salvation (by Lucifer)

Believing about being holy as well as the cause.

To manipulate Dante Alighieri and the other crusaders into thinking they would be forgiven for their sins in exchange for their services in the Crusades within the Middle East (partially succeeded).

The Bishop is the overarching antagonist in the videogame Dante's Inferno. He is only seen during cutscenes.

He was voiced by Peter Egan, who also voiced Henselt in Witcher 2: Assassins of Kings.

The Bishop is the local "holy man" in the 12th century Italian town of Florentina (now known as Florence) who deceives Dante Aligheri and the other Crusaders into thinking they will be forgiven for all their sins for taking part in The Crusades. However, both Dante and Francesco immediately began to realize the Bishop's false promise of salvation after going to Hell and soon realize that their cause was by no means holy as he said it was. Lucifer also referred to the bishop as a "salesmen of salvation" alluding to the fact that he could not forgive sins.

In the videogame, the Bishop only appears in flashbacks, telling the crusaders that "in payment" to "reclaim the Holy Land", they are absolved of their sins. Though he doesn't appear in game, he is mentioned by Dante twice. When Death gives Dante "everlasting damnation" for sins, the latter responds that the Bishop absolved them. When in the circle Gluttony, Lucifer mocks Dante by believing the Bishop's words, calling him the "salesman of salvation".

In the comic by Diego Latorre, this Bishop also appears in the third pit of the Malebolgias where Dante criticizes him for lying about the Crusade.

The bishop, in a last-ditch effort to trick him, tells Dante his superiors lied to him as well. Dante then cuts him in a half with his Scythe.

The Bishop was the delusional and charismatic holy man who promised Dante, Francesco and the other Crusaders to absolve them for the sins they would commit in exchange for their services during the Crusades by believing anything holy. But later, the Bishop's true nature was revealed: He could not forgive the sins. Therefore, he was responsible for the damnation of the Crusaders as he had in fact controlled them. 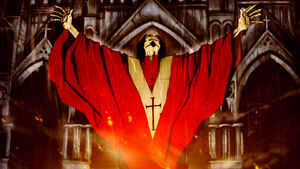 The Bishop declaring that God "absolves" the crusaders of their sins.
Add a photo to this gallery

Retrieved from "https://villains.fandom.com/wiki/The_Bishop_(Dante%27s_Inferno)?oldid=4343210"
Community content is available under CC-BY-SA unless otherwise noted.