The Black Glove is a criminal organisation and devil-worshipping cult that appears in Grant Morrison's run on Batman.

The Black Glove was founded by Thomas Wayne at some point in the 1700s as an attempt to make contact with supernatural forces. Coincedentally, the Hyper-Adapter that Darkseid had sent encountered the group just as they were performing a satanic ritual. The other members fled in terror, but Thomas Wayne welcomed the entity, gaining immortality from it.

At some point in the 20th century, The Black Glove would once again reform in an attempt to summon supernatural forces, however, this would prove fruitless as a time-travelling Bruce Wayne-who was to be their sacrifice-leapt forward in time, thwarting their plans.

Thomas Wayne-now Dr. Hurt-would later encounter Batman as a volunteer for an isolation experiment. While under the influence of hallucinogens, Hurt discovered that Batman was none other than his descendant Bruce Wayne. Knowing this, as well as finding out about a hidden word within Batman's psyche called Zur-En-Arrh, allowed Hurt to resume his attempts at raising hell on Earth.

In the ensuing years, Hurt recruited three police officers under the guise that they were to be Batman's substitutes in case the worst should happen. The three men were tortured in various ways, both physically and psychologically, creating not Batman replacements, but horrific parodies.

After a year spent globetrotting, Batman returned to Gotham and seemingly erased all major criminals from the streets. One of his rogue replacements had shot the Joker in the face, leaving him with a permanent smile and incapacitating him for the time being. Around this time, Bruce had begun seeing African supermodel Jezebel Jet. All of this, however, was manipulated by The Black Glove to soften Batman.

When visiting his international allies, The Batmen of All Nations, Batman found out he was being stalked by an agent of the Black Glove. The other vigilantes believed it to be one of their arch-enemies, due to several calling-cards. In the end, it was revealed to be John Mayhew, a corrupt businessman and associate of the Wayne family.Batman would later be confronted by the other two Batman replacements: a steroid-enhanced Batman that resembled Bane and a devil-worshipping Batman. The first was shot by the gun-toting Batman and the third slipped out of Batman's grasp.

While musing upon all that was happening, Jezebel Jet had figured out Bruce's secret identity. Having no choice now, Bruce decided to let Jet into his personal life, puzzling both Alfred and Robin with this uncharacteristic attitude. When Bruce tells Jet his confusion at how he can't catch a criminal mastermind that is making itself so obvious to him, Jet proposes that maybe Batman is the Black Glove. When Bruce tries to explain how this couldn't be true, Jet utters the phrase Zur-En-Arrh, sending Bruce into a catatonic state while Dr. Hurt drugs him and leaves him out in the streets.

Bruce later comes back as the Batman of Zur-En-Arrh, tracks the Black Glove to Arkham Asylum and is pitted against the newly-revived Joker. When Batman sees Jezebel Jet about to be poisoned, he immediately runs to her aid, only to be poisoned himself. It is then revealed that Jet was immune to those toxins and was infact working with the Black Glove. Batman is buried alive in his old costume and manages to dig his way out. Meanwhile, the Joker tells the Black Glove that their supposed victory was all a ruse: if he couldn't beat Batman, no-one could. At that moment, Batman and Nightwing appear and terrorise them, forcing Dr. Hurt to flee. Batman catches up to him and Hurt tries to coerce Batman to his side. When that fails, Hurt reveals himself as Bruce Wayne's father, but Batman refuses to believe this. As Hurt tries to escape via helicopter, Batman chases after him, crashing into the sea and seemingly killing them...

Both Bruce Wayne and Dr Hurt are revealed as alive, Bruce would later be sent through time by Darkseid, setting the stage for Dick Grayson and Damian Wayne to become the new Batman and Robin. Dr. Hurt would take up residence in Mexico, sending various assassins after the new Batman and Robin under the guise of El Penitente. Jezebel Jet is assassinated by agents of Talia al Ghul, who would claim her head as a trophy. The Joker left Gotham City and killed off any remaining Black Glove members. A new villain known as Professor Pyg becomes a threat at this time, being a new recruit of The Black Glove.

Dr. Hurt, along with an army of thugs known as the 99 Fiends, once again invade Wayne Manor and incapacitate Batman, Robin and Alfred. At that moment, the original Batman appeared and he, along with the Joker, settled the score with the Black Glove leader. At the same time, Professor Pyg had plans to release a plague into Gotham's atmosphere and turn the afflicted into Dollotrons, but was stopped by the Dynamic Duo before he could do any lasting damage.

The Black Glove leader. A criminal genius with ties to the Wayne Family. He has an obsession with bringing out and manipulating the worst in people, suggesting a devil-complex.

An African socialite. She was sent to seduce Bruce Wayne and lower his guard while the Black Glove slipped in and slowly broke Batman's mind.

Talia al Ghul seems to consider her an arch-nemesis.

Real name Guy Dax. A French surgeon with a wife and two daughters. He harbours sadistic and perverted fantasies that compel him to adopt a more monstrous appearance. He admires the Joker for his commitment to madness, but had his face disfigured out of cruel irony. 6 months later, he was apprehended by the new Batman and Robin.

The Club of Villains

A group consisting of arch-enemies to the Batmen of All-Nations. They consist of:

The Three Ghosts of Batman

A gun-toting Batman and presumably the sanest of the three. He shot the Joker in the face, badly disfiguring him and driving him even further insane. Presumably this was planned by the Black Glove.

A version of Batman that had been enhanced by monster serum and Venom shots to make him appear to be a mix of Batman and Bane. Bruce suspects this may have been to play on his fear of the real Bane.

The most dangerous of the three ghosts. Bat-Devil sees himself as an agent of The Devil, sent to rid the world of men like Batman. After the events of Batman R.I.P., Bat-Devil absolves himself of his wicked ways and becomes the new Azrael. This change of heart is implied to be short-lived, however, as a possible future shows Batman (Now Damian) going up against Devil-Batman in a fight to the death.

The highest-ranking members and benefactors of the Black Glove. They consist of several corrupt officials from various nations and are portrayed as having a collective wealth that surpasses even the Wayne family's. They are all killed off by the Joker.

After surviving being shot in the face, the Joker is driven even further insane by his new appearance, now consisting of a permanent smile that is tearing up his face. He believes that Batman was responsible and as such, joins the Black Glove for revenge. However, his allegiance is all a farce, as he kills off a majority of the Black Glove members. (as he wants Batman all to himself: Joker's goal is to break Batman's greatest plan of life with Joker's own greatest plan before eventually killing Batman.)

Real name Lazlo Valentin. A crazed scientist obsessed with his own deranged idea of beauty. Pyg kidnaps random people, lobotomises them and fuses a doll-mask to their faces. These now brain-damaged people become his servants, known as Dollotrons. Pyg is known for his bizarre ramblings, using symbolic references rather than literal speech, a trait similar to the narrative in Grant Morrison's Arkham Asylum story. His real face has never been shown, but it is implied in the future that he had plastic surgery to make his facial features even more pig-like.

A psychopathic hitman. His flamboyant appearance belies his true ferocity. In his first appearance, he had skinned alive a group of supermodels and eaten their faces. He never talks, making his exact mental state debatable.

99 thugs sent by Dr. Hurt to take down Batman and Robin through sheer numbers. The fact that Hurt had to resort to this reveals that he hadn't planned his conquest to take this long. All members are named after devils and demons from various religions and cultures.

An aged millionaire tasked with luring the Batmen of All Nations (an organisation he had established) to a secluded island resort and assassinating them one by one. Batman deduces that he had turned to villainy simply to escape boredom. When Dr. Hurt blew up the island, he left Mayhew to die. Joined the Black Glove after the deaths of Thomas and Martha Wayne.

A friend of Martha Wayne and serial adulteress. Much like Jezebel Jet, she was tasked with seducing Bruce Wayne, drugging him and offering him up as a sacrifice for Barbatos. Her reason for doing so was to gain eternal youth. A treacherous woman, she was willing to defile the memory of Bruce's mother to further her agenda. 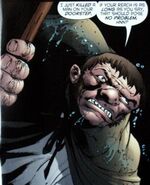 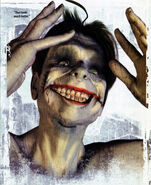