The Blackbird is the titular main antagonist of the short story Blackbird in Five Nights at Freddy's: Fazbear Frights #6 .

The Blackbird is a fictional character created by Nole and his friend Sam for the film they're making for their filmography class. Inspired by both the animatronics at Freddy Fazbear's Pizza and Edgar Allan Poe's "The Raven", the Blackbird was supposed to haunt the main character at night and force him to reveal his darkest secrets in the narrative Nole and Sam wanted to create.

With the help of his mom and his dad, Sam created a costume for the character and met with Nole on the set to start recording the film. Jokingly, they asked each other what their darkest secrets are. Nole revealed to Sam that he used to bully a girl named Christine (who was overweight and poor) when he was twelve, but despite declaring that he's not proud of it Noel didn't seem to feel sorry for what he did at all, still finding his actions hilarious. Sam, himself a victim of bullying, became furious and left the set with his costume after a brief argument. Later that day, Nole received the message that Sam had been ran over by a train and was declared missing when his body couldn't be found. While the search for him, which Nole participated in, was unsuccessful, there were black feathers and blood on the train tracks.

Nole blamed himself for what happened, thinking that Sam got hit because he didn't pay attention to his surroundings in his anger at Nole. Shortly afterwards, Nole started to perceive a presence following him everywhere, a feathered fiend always just out of sight. When attempting to sleep, he felt stuck in some kind of state between asleep and awake, getting attacked by the Blackbird, who always vanished when a ray of light entered the room. He figured the Blackbird had somehow come to life or that Sam had come back from the dead to punish him for his past actions, haunting the Blackbird's costume, and that he's now going to torture and maybe even kill him. The attacks of the creature kept repeating whenever Nole tried to sleep, becoming increasingly vicious and still vanishing every time Nole turned on the light. Eventually he felt the Blackbird sitting on him, pressing against his chest and preventing him from breathing while he's stuck in his body, unable to move but still perfectly conscious. He felt like he's being dragged to another realm where the Blackbird would torture him, maybe forever. He's only saved thanks to his fraternity brother Ian, who broke into his room after noticing his muffled screaming.

Following the advice of his classmate Amber, Nole decided he had to apologize to Christine, the girl he had bullied all those years ago. Perhaps that would make the Blackbird stop haunting him. Still being followed his shadowy stalker, he finally managed to find Christine and gave her a heartfelt apology, finally understanding how horrible his actions had been. Christine decided to forgive him and the weight lifted from his chest, the Blackbird's presence no longer with him. Nole then received a call and rushed back to his college: Sam had been found, alive and with a broken leg, meaning The Blackbird wasn't him. The two met again and reconciled. 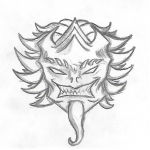