Villains Wiki
Register
Don't have an account?
Sign In
Advertisement
in: The Simpsons Villains, Mutated, Parody/Homage,
and 28 more

The Blob (The Simpsons)

Ability to eat anything

Eat all the fat people in Springfield (succeeded).

The Blob is an intergalactic alien that came to Springfield in a meteor from outer space and is a parody villain that appeared in The Simpsons Tree House of Horror XVII. It was a homage to the well-known slimy monster from the movie of the same name, in this story however instead of the monster being an alien it was actually a mutated Homer, who became The Blob after ingesting a strange substance from outer space.

As Homer and Marge make out in the backyard, a meteorite falls nearby, burning off the top of Marge's hair in the process. Cracking open, it reveals a green slime resembling a melted marshmallow. Despite his family's objections, Homer puts it on a stick and eats it (despite the goo repeatedly trying to get away).

That night, his stomach rumbling from hunger, Homer eats all the food in the house. He also eats Snowball V and attempts to eat Bart but is stopped by Marge. Homer then becomes obese and eats a teenager in an attempt to "savor" him from the flames of a barbecue fire. Homer soon turns from yellow to green, gets bigger and fatter and loses his legs. Now he is a gigantic green blob, rampaging through the streets of Springfield, eating all the fat people he can find.

As Homer samples bus passengers (including Ned Flanders) as if they were candies, Dr. Phil McGraw shows up with the Simpson family. He tells Homer to stop for their sakes. Homer ends his rampaging for fear of losing Marge and vows to use his insatiable appetite for more constructive purposes (he eats Dr. Phil anyway; his last words are "Food does not equal love!"). Later, Mayor Quimby dedicates a new homeless shelter. The homeless people enter the shelter, only to find themselves in Homer's gut. 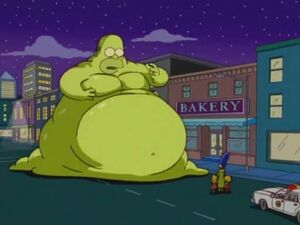 The Blob with Marge, Bart, Lisa and Maggie.