The Bone Collector was a serial killer that Lincoln Rhyme had attempted to capture, but this lead to Rhyme's accident which left him paralyzed.

Three years later, the Bone Collector presumably resumes his killing spree, which leads to Rhyme teaming up with Amelia Sachs to try and solve the case. However it turns out the killer committing the crimes is a copycat wanting the original Bone Collector's glory. The copycat Collector kidnaps Amelia's sister and attempts to drown her, only to then be killed from suicide by cop.

The real Bone Collector, aware of the copycat, plans to come out of hiding as he considers "unfinished business" between him and Rhyme. The Bone Collector is shown to be a married, upper middle class suburbanite, who secretly has a victim tied up in his wine cellar. 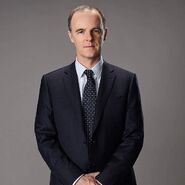 Promotional photo of the Bone Collector.
Add a photo to this gallery

Retrieved from "https://villains.fandom.com/wiki/The_Bone_Collector_(television)?oldid=3909345"
Community content is available under CC-BY-SA unless otherwise noted.