Swimming
Strong digestive tract that dissolves plastic, glass, motor oil, etc.
Superhuman durability and flexibility enabling them to survive being crushed by heavy objects
Able to change their body colors depending on their emotions or actions
Molars to crush plastics
Coiling tentacles that enable them breathe air
Bubbles and plasma-based technology
Advanced intelligence

Take over Earth and use the planet to hide from their enemy Gorg.

The Boov are an intergalactic race of aliens in Almost Home.

They serve as (former) antagonists in Home.

The Boov invade earth to hide from their enemy, the Gorg. Oh is not a popular Boov, and as of that they do not go to his party, but Oh tries to get them to go to his party, so he sends an invitation to all the Boov (including the Gorg himself), Kyle and all the Boov go after him, but later they find out that can stop the invitation by putting on Oh's password but they don't know what it is, so they go out to find him and tell him what it is, but they escape after Tip turns the gravity off.

They all go back to Captain Smek with Oh after the Gorg invades them, Oh stops the invitation and the Boov were amazed by how close Oh was to the Gorg, they all agree that Oh should be the new captain.

After Oh saves them by returning The Gorg the rock that Captain Smek had that on his "shusher", they all go to his party and celebrate. 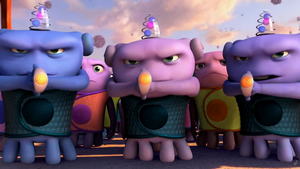 Boov policemen surrounding Oh and Tip.
Add a photo to this gallery

Retrieved from "https://villains.fandom.com/wiki/The_Boov?oldid=3985883"
Community content is available under CC-BY-SA unless otherwise noted.