To Assimilate all life in the Universe to bring order to chaos.

The Borg were a pseudo-race of cybernetic beings, or cyborgs, from the Delta Quadrant. No truly single individual existed within the Borg Collective (with the possible sole exception of the Borg Queen), as they were linked into a hive mind. Their ultimate goal was perfection through the forcible assimilation of diverse sentient species, technologies, and knowledge. As a result, they were among the most dangerous and feared races in the galaxy.

The precise origins of the Borg are unclear - with several possible origins mentioned over time. While not identified with certainty, they were possibly responsible for an attack on the Whale Probe and it's creators over 250,000 years ago. (TOS novel "Probe")

The Borg are a major enemy faction in the MMORPG Star Trek Online and serve as the antagonists of both the opening sequence (tutorial-stage) as well as the second-to-last Episode mission-chain: they will also feature heavily in an upcoming patch devoted to a proposed battle with the Borg Queen herself.

Borg in Star Trek Online also engage regularly in raids of major star systems and players may fight them as part of a Strike Force for great rewards - the Star Trek Online universe is an alternate-universe from the one seen in the show, being roughly 200 or more years into the future (as of TOS) and also having merged many different realities into one (for example it has Voyager, Next Generation and even new Star Trek (Nero)).

Also due to their immense popularity, the Borg have appeared in countless Star Trek related video-games and merchandise outside of Star Trek Online, examples being: 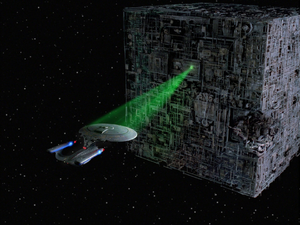 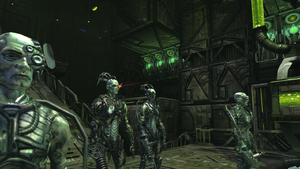 Add a photo to this gallery
Retrieved from "https://villains.fandom.com/wiki/The_Borg?oldid=2759455"
Community content is available under CC-BY-SA unless otherwise noted.