The Boss is a villain from the animated series Dan Vs. She is the antagonist of the episode The Boss. Dan and Chris both work for her yet she bullies both of them.

She first appears as a nameless boss who is more prone to make fun of her employees, especially Dan and Chris. She is later revealed to be a demon and tried to turn Dan to her side. He does so at first but when she tries to get him to kill Chris he refuses and tricks her into her own demise.

She is a very evil, greedy, sadistic, and heartless woman.

She appears as a human with light brown hair and pale skin at first.

She appears as a succubus with red skin, enlarged pale eyes, tattered clothes and wings, and messy hair.

In her true form, she resembles a classical demon: big, red and menacing with horns and a spiked tail. 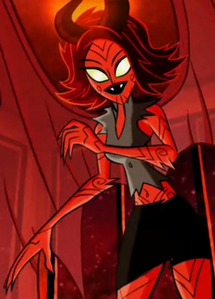 Retrieved from "https://villains.fandom.com/wiki/The_Boss_(Dan_Vs.)?oldid=3814581"
Community content is available under CC-BY-SA unless otherwise noted.