The Church in Silent Hill

Fulfill God's judgement and end the apocalypse by destroying all of Alessa's incarnations (both failed).

The Brethren is a fanatical religious cult based on the witch-hunts of various past cultures, led by a high priestess named Christabella and it is rooted in the town of Silent Hill, West Virginia. They are the main antagonists of the movie Silent Hill based on the Silent Hill videogame franchise. The cult believes that people deemed as witches or sinners must be "purified" via an immolation ritual, ensuring them a "cleansed" existence and to satisfy their god. After immolating a young girl in 1974, the Brethren's horrendous actions incited hatred and darkness within her heart, driving her to condemn all the cultists into a hellish dimension of Silent Hill for 30 years.

The Brethren were the founders of the town of Silent Hill, and most of the town's buildings carry the cult's symbol, a sign of the townspeoples' devotion to their religion. Because the cult was so powerful during the town's heyday, they were able to get away with actions that were reprehensible or illegal, such as abusing a young child and hanging a painting of a woman being tortured in the local hotel.

The Brethren are directly connected to the current abandoned state of Silent Hill, having been the ones responsible for setting the blaze that ate into the coal mines beneath the town, setting the entire town on fire and leading to its community's permanent evacuation. Most, if not all, of the Brethren are either dead or trapped in an alternate reality at the time of Silent Hill's events.

The cult appears to worship a female God, whose picture is seen in both Midwich Elementary School and Dahlia Gillespie's apartment at Nathan Drugs. They seem to have Christian leanings ( specifically Catholic leanings), however, it has been stated by the film's creators that the cult is not related to any one religion. To that end, their symbol is a mixture of icons from different religions. The cult believes that sinful acts must be strictly punished, and that it is possible for females to become possessed by demons if she is associated with a sinful act. The cultists are shown to be obsessed with the concepts of Hell and damnation, even going so far as to etch the words "Heaven" and "Hell" on a child's hopscotch drawing at the elementary school.

According to the canon of Silent Hill, the Brethren stand in opposition to the Order, a fanatical cult seen in the Silent Hill game series who worship a pagan God. Jennifer Carroll, someone who was associated with the Order in the games, was burned alive by the cultists in the film, and her burning was memorialized in a painting that hangs in the Grand Hotel.

After the cultists are dragged into the fiery Otherworld, an alternate reality created by the rage of a certain child they had tortured, they refuse to believe that they are responsible for their own damnation. To that end, Christbella misleads them, telling them that the Apocalypse has occurred, and that they were the only ones pure enough to survive The Devil's wrath. The Brethren believe that their prayers hold back the darkness, when in reality, the coming and going of the Otherworld is in no way affected by their spiritual beliefs.

In 1965, a member of the Brethren by the name Dahlia Gillespie gives birth to an illegitimate child named Alessa, who is immediately deemed a witch by the Brethren due to her lack of paternity. The cult abuses Alessa for nine years, insulting, bullying and ostracizing her, until Alessa is eventually trapped in a bathroom with a pedophilic janitor while trying to hide from the bullying of her by other children at Midwich Elementary. Christabella used this opportunity to insist that Alessa be "purified" for her sin of being born out of wedlock. Dahlia gives in, and on November 1, 1974, Alessa is taken to a sacrificial chamber, where she is burned alive as a witch.

Despite the cult's efforts, Alessa survives the fire and is overcome by rage and pain. In her drive to take revenge on everyone responsible for her suffering, Alessa splits her soul and creates the Otherworld and the Fog World, two alternate realities infected by her split psyche. She drags the Brethren into these worlds, where she punishes them for their crimes against her.

In the Otherworld, the cult has their own brute force of men who are used as guards to Christabella. They wear miner's outfits, complete with full body suits, helmets, and goggles and are armed with metal poles. They show a sense of teamwork when they leave the church and enter the alternate dimension together. They wear their church uniforms under their gear, and often carry bulky flashlights. A group can even be seen carrying a canary in a cage, used to detect shifts in dimensions. This is an allusion to the historical use of canaries in mine shafts to detect pockets of poisonous gases. The outfits are used to protection from the Otherworld and its inhabitants, though it does not do much good, as several Order soldiers are killed by Creepers that eat through their gear.

Cybil Bennett enters a melee fight with a group of them to help Rose Da Silva escape and appears to kill one with ease. These members of the church do not appear to be very adept at melee combat, as they are initially overwhelmed by Cybil's attacks. Several corpses of cult members are seen in the Otherworld, including one whose entrails have been torn out and spread about on the ground near him.

Fate of the Brethren

In the end, all of the cult members died at the hands of Alessa Gillespie and the manifestation of her dark side, Dark Alessa, while Rose Da Silva rescued her adopted daughter Sharon, the incarnation of Alessa's good side.

The Brethren and The Order

Silent Hill: Revelation changes the Brethren's belief system and motivations to being the opposite of that seen in the first film. In Revelation, the cult burned Alessa as part of a ritual to impregnate her with their God, rather than because of her illegitimate birth. The Brethren in Revelation are stated to be the most fanatical members of the Order of Valtiel (mostly known as the Order), the cult that they opposed in the first film's canon. The cult is also shown to mysteriously still have living members in the Otherworld, despite that the ending of the original Silent Hill depicts the deaths of all remaining members of the Brethren. The cult's symbol is also vastly altered, changing from having 4 crosses to being made up of various circles, with no crosses in sight.

It is stated that they will not breathe the air of the Otherworld, as they believe it taints their purity, and that this is why they wear the mining outfits. When Heather Mason yanks the mask off of a member's face, he actually does die of asphyxiation, as his throat and mouth clog with an unknown black liquid.

In Revelation, the Brethren have the ability to temporarily leave the alternate reality by carving images of the Halo of the Sun into their chests as same as the members of the Order themselves, however, this ability does not exist in the first film's canon. Vincent Cooper is able to leave the Otherworld through this technique, and it is implied that Claudia Wolf uses it to hire a private detective named Douglas Cartland to stalk Alessa's good side. How the cult knows that Alessa's good side exists in a separate body is never explained.

The living members of the Brethren along with the members of the Order appeared at their secret haven known as the Sanctuary and were all possibly destroyed after fleeing in fear from their leader Claudia Wolf who transformed into the demonic manifestation of her religious fanaticism and died at the hands of Pyramid Head who killed Anna, a younger member of the Brethren in the first Silent Hill film. 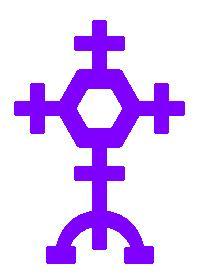 The Brethren cult's symbol, which is a combination of 4 crosses.

The Brethren pray in an attempt to chase away the Otherworld. 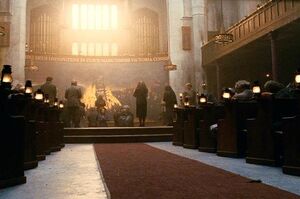 The Brethren inside their Church.

This golden cross-like symbol represents the crest of the Brethren cult.

The symbolic crest of the Brethren cult. 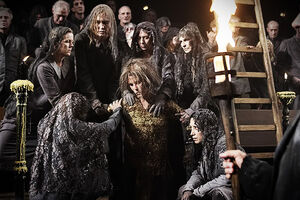 Dahlia is captured by the Brethren. 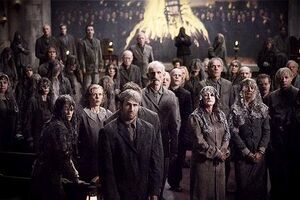 Members of the Brethren. 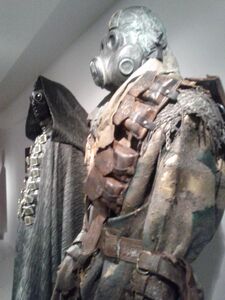 The costumes of both the Order Soldiers and the robed Order members on the set of Silent Hill: Revelation. 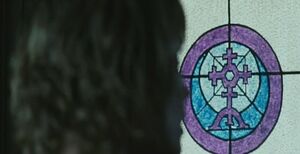 A symbol of the Brethren is found on the glass stained windows of Midwich Elementary School. 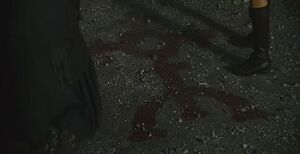 An iconic symbol of the Brethren found on the floor within the lobby of the Grand Hotel. 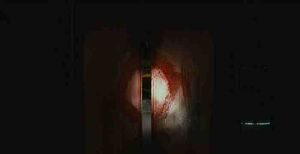 A symbol of the Brethren cult inked in blood is found on the interior elevator doors within the Otherworld version of Brookhaven Hospital. 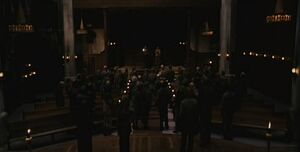 All the members of the Brethren remain within the safety of the church. 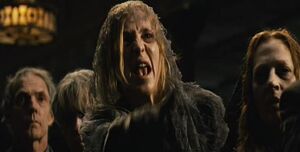 The overzealous members of the Brethren. 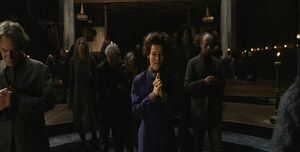 Christabella and the rest of the Brethren begin to pray.

A flashback of Dahlia being betrayed by the Brethren who intened to kill Alessa instead of helping her. 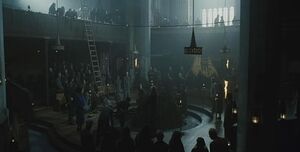 The Brethren began one of their religious rituals that begins with burning. 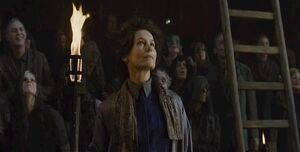 Christabella presiding over the Brethren's rituals. 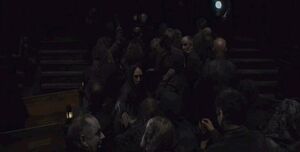 All of the panic-stricken members of the Brethren fled in terror. 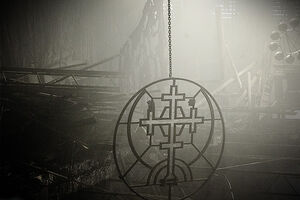 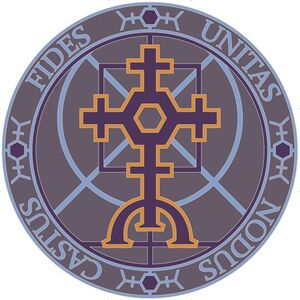 The symbolic emblem of the Brethren.
Add a photo to this gallery

Retrieved from "https://villains.fandom.com/wiki/The_Brethren_(Silent_Hill)?oldid=2958828"
Community content is available under CC-BY-SA unless otherwise noted.