The Bride (The Haunted Mansion)

The original Bride, referred to by fans as the "Corpse Bride", is a ghostly character from the popular Disneyland attraction The Haunted Mansion. She is the original incarnation of the Bride character.

In the early days of the attraction, the Bride was featured in the attic alongside the Hatbox Ghost. During that time, the story of the attic was most likely that the Hatbox Ghost was the groom of the Bride. However, she decapitated him for unknown reasons and hid his head in a hatbox. She presumably did this again to at least two other men, whose ghosts also became trapped in the hatboxes their heads were hidden in.

Even though it is unknown how the Bride died, it is presumed that she was killed by another man that she tried to seduce and kill. Her ghost returned to the mansion to haunt the attic, surrounded by the angry ghosts of her past murdered husbands.

The Bride's model then changed over the years, changing from a corpse-like model with realistic glowing eyes to a later model that had a black, faceless figure and two large, round eyes. Claims also exist of a version that appeared as a faceless model with slanted eyes, though its time in the attraction and where it places in the Bride's model timeline are up for debate. Though some claim that each model of the Bride is a different character, this is unknown and unconfirmed. As the first versions of the Bride before the 1990s had no name or confirmed story, they are speculated to be the same character.

In the 1990s, the Bride was replaced with another, with this version having a clear face and being portrayed as a tragic heroine. This version of the Bride later had another model.

In 2006, the Bride was replaced once again with the clearly villainous Constance Hatchaway, which is the current Bride model. However, Walt Disney World and Tokyo Disneyland's mansions kept the heroic Bride.

The Story and Song from the Haunted Mansion

The original bride appears as a minor character in The Story and Song from the Haunted Mansion book and vinyl record, encountering the main characters for a brief time, but not antagonizing them.

The first incarnations of the Bride are shrouded in mystery. Even though much is known about the heroic Bride and Constance Hatchaway in terms of story, the original Bride is mainly portrayed as a silent, menacing figure who carries a constant feeling of dread and danger. While it is unknown why she murdered her husbands, it is assumed that it was because she was a black widow seeking their money (a trait/goal that would later be incorporated into Constance's character). 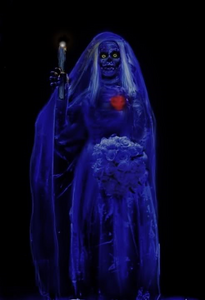 The corpse-like model that was presumably the original Bride during the Mansion's opening in 1969. 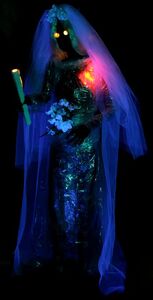 Later model of the Bride, changed likely in the 1970s. 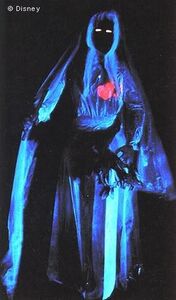 Additional model of the Bride. Some claim that this model was the original 1969 version before being replaced with the corpse, but this is up for debate and was likely a placeholder or backup model.

Footage of the original Bride in the attic (overlay has been added for clarity).

Footage of the original Bride, whose eyes can be seen glowing in the dark (overlay added for clarity). 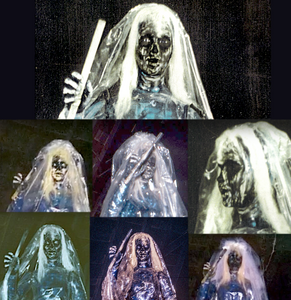 Model photos of the original Bride. 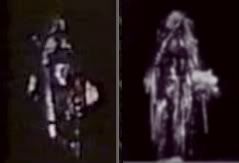 Footage of the Bride as seen in the March 1970 Disneyland Showtime episode, which featured the Osmond brothers and showcased the new Haunted Mansion. 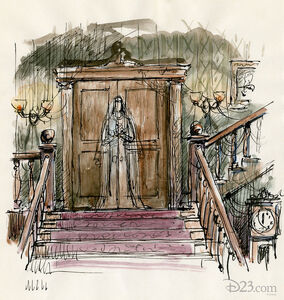 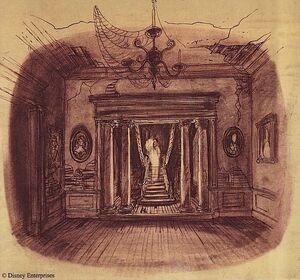 Concept of the Bride back when she was pitched as a changing portrait. 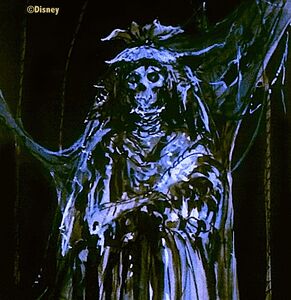 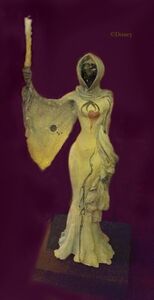 Concept model of the Bride. 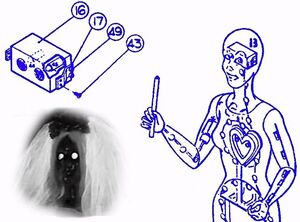 The original bride (left two) with the other Bride incarnations.