The Bride in Black

The Bride in Black

Killing people while disguising as a black bride.

Live again in Josh Lambert's body and take his own life (partially succeeded).

Parker Crane, also called The Bride in Black, "Marilyn Crane", "The Dark Bride" and "The Old Woman" is the secondary antagonist in the Insidious franchise. He is a man who, in life, became a serial killer after suffering years of psychological abuse at the hands of his mother, and later became a parasitic ghost bent on killing and possessing Josh Lambert.

The Old Woman wears a seemingly bridal, black Victorian dress, laced with black finery, and holds a small red candle in her hand. Her appearance is ghastly, as she sports long, not very well taken care of, hair. She has Dark eyes and a face laden with wrinkles and pockmarks. This is later shown to be a disguise as a serial killer for the deluded man, Parker Crane.

During the opening scene, the old woman is seen outside the window of presumably Lorraine Lambert's house holding a candle as she smiles evilly. Later, when Lorraine visits Josh, Renai and Elise and tells Josh about the old woman. She recounts that Josh used to suffer night terrors as a child due to an 'old woman' visiting him at night. Dismissing his fears as superstition, as well as telling Josh to grow up and shrug away the bizarre dreams, Lorraine became aware of the malevolent hag's existence when she witnessed her presence in photos with Josh in them. Disturbingly, in a chronological span, the Old Woman seemingly moves in closer to Josh as he ages, nearly touching him in one photo. Elise Rainier explains that the Old Woman is a 'parasite' who befriended Josh's astral form in an attempt to possess his physical body. The only way to stop her from doing so was to repress Josh's memory of her and cease taking photos of him. However, Josh developed a subconscious fear of having his photo taken. Towards the end of the film, the Old Woman reappears to Josh by standing outside a window. Josh, filled with anger and fear, lashes out at her, shouting "LEAVE ME ALONE!!". She seemingly retreats back into the darkness while Josh and Dalton escape the Further together.

The Lambert family celebrates that the nightmare is over, but Elise feels something wrong. Taking a quick picture of Josh, Elise sees, much to her horror, that his image is replaced by the Old Woman. In retaliation, the Old Woman strangles Elise with Josh's body and the movie ends with seemingly leaving the fate of Josh ambiguous.

The films credits ends with the Old Woman blowing out the candle into complete darkness.

In Chapter 2 the old woman is shown to actually be a male serial killer whose actually name was Parker Crane. Parker was abused by his mother during his childhood. She even hates the mere mentioning of the name "Parker" due to the fact her former husband, Parker's father gave him that name since birth and soon no longer with his wife though it is unknown what happened to him upon his death after that (possibly committed suicide or his wife killed him), but his father earned her mother's hatred which is why she prefers the name "Marilyn". He dressed as a old woman in a black wedding dress to hide his identity and murdered about 15 women.

His mother raised him as a little girl causing himself to have a complex personality. He was hospitalized after a self-castration and then killed himself by jumping from a great high. After a encounter with a young Josh. He was seen then after by Lorraine as a ghost.

It was said he targeted Josh because he envied his youth. At the ending of Chapter 1, he took over Josh's body and killed Elise. He was arrested and later released via lack of evidence. Parker's soul was deteriorating Josh's body due to him being physically dead. He was then convinced by his mother's memory that he needed to kill Josh's family to save the body.

The soul of psychic Elise soon battled and killed the spirit of Parker's mother within the Further, and the Bride in Black personality along with her, forever putting Parker's spirit to rest and freeing Josh.

In the prequel it is revealed that the Bride in Black was terrorizing Elise ever since she helped Josh, threatening to kill her, and attempting to choke her to death on multiple occasions. This frightened her so much, that she retired from being a psychic for a while. During the events of the film she finally managed to overcome her fear, and temporarily defeat The Bride while trying to save Quinn Brenner from The Man Who Can't Breathe. Despite this, at the end of the film it is revealed that The Bride began stalking her again, and eventually The Bride manages to successfully kill Elise in the first film.

While Parker's behaviour and actions can never be excused, most of of it was for the benefit of his insane mother who abusively forced him to become a transgender named Marilyn, simply cause she wanted a daughter instead.

As an adult, Parker eventually became a vicious serial killer known as the Bride in Black. Eventually he was hospitalized and committed suicide by jumping out the window. But even in death Parker continued to cause pain and suffering, haunting Josh sense a young age as he felt envious of what he perceived as a stable love between Josh and his mother. And while his desire to live a normal life again can almost be sympathetic, he continued his ways of a serial killer once in possession of Josh's body, attempting to murder the family, even the kids.

However, The presence of young Parker's spirit in the Further suggests there might still be good in him somewhere deep down. 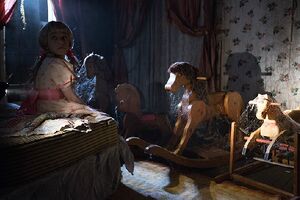 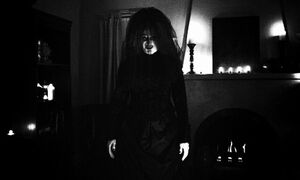 The Bride appears in the living world inside Josh Lambert's body. 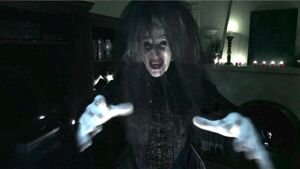 The Bride, now as Josh about to kill Elise.

Marilyn Crane, aka Parker Crane, as Josh, appears before Renai Lambert as he is choking her.