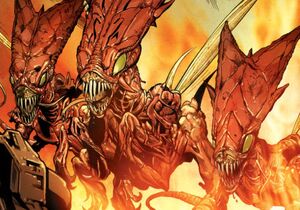 The Brood are a vicious race of parasitic aliens appearing in stories published by Marvel Comics and they were inspired by the Xenomorphs of the Alien franchise. They were created by Chris Claremont and Dave Cockrum, and they mostly appear as villains of the X-Men, but they also encountered Ms. Marvel and the Guardians of the Galaxy. The Brood possess wings, fanged teeth and a stinging tail. They have a hive mentality and mindlessly follow a queen. To reproduce, they must infect other races with their eggs.

First battles with the X-Men

The first Marvel hero to encounter the Brood was the Kree soldier Mar-Vell, who had been ordered to make contact with the stranded Admiral Devros on a planet in the Absolom Sector, a region known to be infested with Brood. Mar-Vell's team, which includes the medic Una and Colonel Yon-Rogg, is ambushed by Brood warriors after landing on the planet and taken prisoner by the Brood-infected Devros. The colony's Brood Queen impregnates each captive with Brood embryos, but Mar-Vell and Una manage to escape, destroy both leaders of the Brood colony, and ridding themselves of their infections using Una's modified omni-wave projector which had been designed to eliminate Brood embryos. After rescuing Colonel Yon-Rogg, the trio escape the planet and are rescued by the Shi'ar royal Deathbird.

Years later Deathbird makes a deal with The Brood to gain their help deposing her sister Lilandra as ruler of their empire. As a reward for their help, Deathbird gives the Brood Lilandra, the X-Men, and the de-powered Carol Danvers, along with Fang of the Imperial Guard, to use as hosts. The Brood infect the entire party, except for Danvers, who they perform experiments on because of her half-human/half-Kree genes. Wolverine's adamantium skeleton allowed his healing ability to purge him of the embryo, and he helps the others escape. He is unable to save Fang, who becomes a Brood warrior before they leave. The Brood Queen orders her forces to find them, until she is contacted by the Queen embryo that is implanted in Cyclops. It explains that the X-Men are returning to Broodworld. Resigned to their dooms, the heroes help the Acanti race recover the racial Soul, a supernatural force that must be passed from one Acanti leader ("The Prophet-Singer") to the next. The Soul is located in a crystalline part of the dead Acanti Prophet-Singer's brain.

The Queen goes with her minions, and battles the X-Men, turning them into Brood warriors. The Prophet-Singer Soul is almost infected by the evil of the aliens, and Wolverine tries to mercy-kill his friends and the Queen but they are saved when Danvers, now a mighty cosmic hero called Binary (due to experimentation), arrives and releases the Soul. Before it goes to its next host, the racial Soul cures the X-Men and Lilandra, and turns the Queen into a crystal statue. It also causes the Broodworld to explode, but the X-Men and their allies escape. Some of the Brood also manage to escape before the planet explodes. The new Prophet-Singer then leads the Acanti to safety in deep space. Returning to Earth with the Starjammers, the X-Men defeat and detain the Brood Queen infecting Charles Xavier in the first Earth-based confrontation with the Brood. The advanced medical facilities at the Starjammers' disposal are able to transfer the consciousness of Xavier from the Brood Queen's body to a new cloned body, enabling Xavier to walk again.

Hannah Connover, previously infected with a Queen, soon begins to demonstrate attributes of Brood. She uses her new-found "healing" powers to become a holy healer and cure many people with her reverend husband, but secretly her Brood nature causes her to infect many people with embryos. Across the Galaxy, on the "true" Brood Homeworld, the Brood Empress sends her "firstborn" Assassins to kill Hannah for going against the Empress' wishes. Unable to stop future waves of Assassins from coming, the X-Man, Iceman, freezes Connover, putting her in suspended animation and causing the current firstborn to kill themselves, as in their minds the mission was accomplished. Connover is assumed to still be in suspended animation with her Queen host in the custody of the X-Men.

During the Contest of Champions II, the Brood abduct several heroes and pose as a benevolent species willing to give the heroes access to advanced technology after competing against each other in a series of contests. However, in reality, the Brood intend to use Rogue, infested with a Brood Queen, to absorb the powers of the contest winners and become unstoppable. Fortunately, Iron Man realizes that the Brood are drugging food to amplify aggression- relying on his armor's own life-support systems to prevent him succumbing to the 'infection'- and is able to uncover the plot. Although the Queen had already absorbed the powers and skills of the various contest winners- in the form of Captain America, Thor, the Hulk, Spider-Man, Jean Grey and the Scarlet Witch-, the remaining heroes managed to defeat her. The Brood Queen was extracted from Rogue with the aid of Carol Danvers, who forced the Brood Queen to flee by threatening to kill Rogue. After confirming that Rogue was cured, the heroes returned home.

The Brood return to Earth in the Ms. Marvel series and battle Carol Danvers, who as Binary played a key role in their first great defeat. Strangely enough, none of the Brood present recognize who she is, possibly because of her inability to fully access her cosmic powers, which also changed her physical appearance. The Brood are also stalked and summarily exterminated by the alien hunter called Cru, with whom Ms. Marvel also came into violent contact.

During the invasion of Annihilus and his Annihilation Wave, the Brood were almost decimated and the species is now on the brink of extinction. Some Brood appear in the arena of planet Saakar in the Planet Hulk storyline of The Incredible Hulk, one of them even becoming a main character. A Brood referred to as "No-Name", who becomes a genetic queen because their race is near extinct, becomes the lover of insect king Miek and also appears in World War Hulk. When it is discovered that Miek was the one who let the Hulk's shuttle explode, No-Name and Hulk attack Miek. Near the end of the War the "Earth Hive", the shared consciousness of every insect on Earth, use Humbug as a Trojan Horse to deal a crippling blow to No-Name, rendering her infertile and poisoning the last generation of hivelings, growing in Humbug's body. No-Name is a rarity among the Brood, as she learned to feel compassion for other living beings.

Given the chance to lower the Brood's numbers further, the X-Men discovered that the Annihilation event had caused the interstellar ecosystem to destabilize, since the Brood, dangerous as they are, served as natural predators for even worse species. These remaining species are now breeding out of control and present a greater threat than the Brood ever did. With no other choice, the X-Men act to prevent the Brood extinction. According to Bishop, there would be a race of benevolent Brood in the future, prompting the X-Men to willingly serve as Brood hosts, so that they could instill them with the same compassion felt by No-Name. After being connected with the hive-mind, the X-Men learned of a nearby Brood who was born with ability to feel compassion, making him the Brood equivalent of a mutant. While such Brood are typically destroyed upon hatching by their kind, this one was permitted to live do to the Brood's dwindling numbers. After rescuing the Brood mutant and defeating the Brood in battle and allowing them to escape, the X-Men had their Brood embryos removed, to be raised aboard the Peak, with the Brood mutant acting as their mentor.

The Brood is governed by a supreme matriarchy, at the top of which sits the Brood Empress. The Brood reproduces asexually and therefore has no clear divisions of gender. Although the Brood lives by a caste system, some of the roles have proven to be flexible.