Kill everyone whom he comes across (mostly succeeded).

The Bunnyman is the titular main antagonist to the horror movie trilogy of the same name.

He was portrayed by Joshua Lang in all three movies.

The Bunnyman is a tall (6'5") and physically strong man who never takes off his bunny costume, though occasionally he will remove his mask if he needs and/or wants to.

The costume The Bunnyman wears progressively gets worn down with each subsequent movie. In the first film, it's in nearly perfect condition, with only a few blood stains on it and the ears stand straight up. In the sequel, it shows plenty of wear by having much more dirt and dried blood on it and he's also gotten rid of the bunny styled gloves, most likely because they were a hassle to grab things with. The ears have started drooping at this point, likely due to the wires inside rusting and breaking. By the final movie, it's moldy and horribly stained due to it never being washed. The ears are completely limp at this point, the wires most likely having been removed.

The Bunnyman's face is only seen a few times in the trilogy. The first time it's seen, there's hardly any skin on his head at all and he's completely bald. By the second film, the flesh on The Bunnyman's head has rotted to the point of appearing white. His face is seen one more time in the final shots of the last movie, now appearing flaky and dried up like a mummy's skin.

In the final film, it was revealed that when he was a child, The Bunnyman had blonde hair and white skin.

The haunted house he works for says he's 7ft tall, though this is obviously exaggerated as with most amusement park attractions.

Bunnyman with his love interest, Melissa. 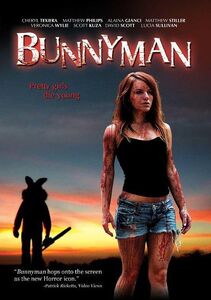 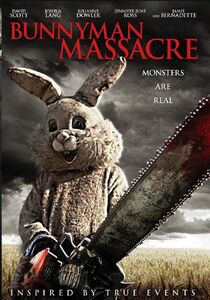 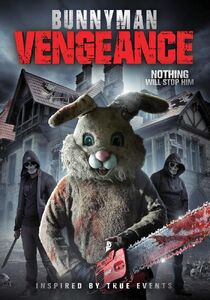 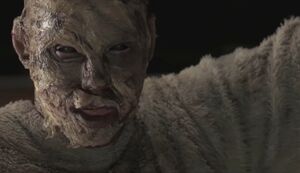 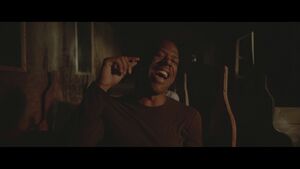 John, the man who killed The Bunnyman's only friend and permanently scarred his face. 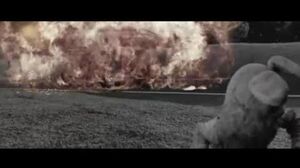