Founder and CEO of BMCO

Steal every single star in the galaxy and pulverize them in order to create more power to his electronic world.

Ensure the Little Prince expunges his childhood and maintains a tedious grown-up like him.
Dispose of the little girl (all failed).

The Businessman is the main antagonist of the 2015 animated film The Little Prince, based on the 1943 novel of the same name by Antoine de Saint-Exupéry.

Many years later, the Businessman started a bigger business by founding a company called BMCO (probably short for Businessman Company) where he uses the stars to make energy and objects (more likely toys and various things who aren’t both for adults or for working) into paper clips. He make the Little Prince turn to an adult called Mr. Prince and forget his memory of the past and kept him in his position as an incompetent employee. After Mr. Prince realizes who he actually really is, he quits his job.

Later, a Little Girl both help Mr. Prince escape the Businessman and frees the stars from the latter and bring them back to sky where they belong. When the stars were released, the Businessman cries how it won't be good for business. 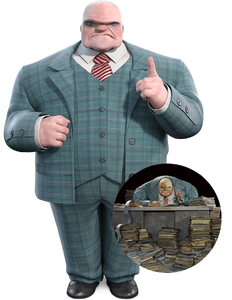 The Businessman with Mr. Prince and Academy Teacher in a frame

The Businessman appearing with other adults and the Conceited Man.