The Butcher (Call of Duty)

The Wolf's right-hand and enforcer

Expertise and knowledge of weapons

Killing people for Al-Qatala's cause.

Enforce the Wolf's plan to remove any kind of foreign power from countries via terrorist attacks (failed).

Jamal Rahar, or better known by his moniker The Butcher, is a major antagonist in the 2019 video game Call of Duty: Modern Warfare. He is the second-in-command of Al-Qatala as well as the fanatically loyal right-hand and enforcer of The Wolf. He is also Kyle Garricks archenemy.

He is voiced by Nick E. Tarabay in motion capture, who also played Ashur in the Spartacus films and Captain Boomerang in Arrow.

Little is known about Jamal Rahar's life before he became the infamous "Butcher". It is known that he was born in Urzikstan and at some point married a woman named Ousa and the two had a son named Amon. After General Barkov's invasion into Urzikstan, Rahar adopted his name "The Butcher" and joined Al-Qatala to remove foreign countries of their government and military power due to believing in the Wolf's cause. However, he promised Ousa that he would make sure she and Amon would be kept away from the consequences of his terrorist actions. Their actions have put them at odds with CIA as well as the Urzikstan Liberation Force led by Commander Farah Karim.

The Butcher is first seen with the Wolf recording a video to the Al-Qatala cell in the UK just before their attack on Piccadilly Circus in London.

After the Wolf was captured by the ULF, CIA and SAS, the Butcher personally led Al-Qatala into the U.S. Embassy where they were keeping him. During this, Butcher had its members executed in order to force their hands. Regardless, after they moved the Wolf to the Ambassador's residence, the Butcher had his forces keep them occupied while he broke him out. The two then later meet and form an alliance with Hadir at their primary HQ after he revealed his deception to Farah. Both he and the Butcher escaped before a joint operation led Captain Price could get them, but resulted in the Wolf's death.

Later, the Butcher planned to use Barkov's gas on Russia as revenge for Barkov's actions against Urzikstan. He met with contacts in St. Petersburg but was then chased by Price and Sergeant Garrick, who need him alive to get to Hadir. Thanks to help from Nikolai, he was subdued and brought to a warehouse for interrogation. Although he refused to talk, after Price involved his family, he gave up that Hadir was going after Barkov. As they leave, depending on the player's choice, Garrick either executes the Butcher for his crimes or leaves him with his family to be found by Russian authorities along with stolen gas. 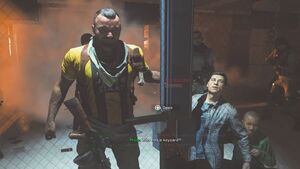 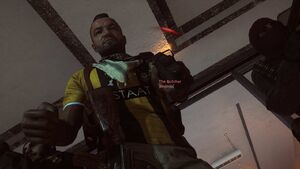 The Butcher killing Garrick if the player opened the door. 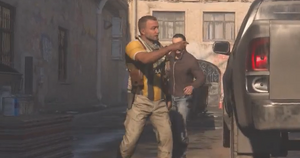 The Butcher in St. Petersburg. 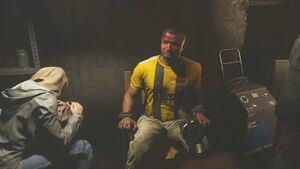 The Butcher with his family, as Price and Garrick interrogate him. 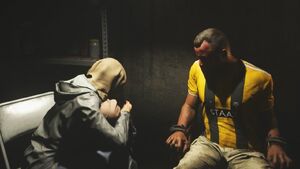 The Butcher alive with his family, being found by the Russian authorities (determinate). 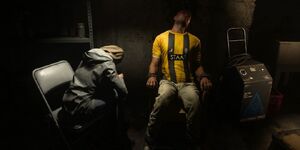 The Butcher's corpse as his wife and son weep (determinate).