Dismembering his victims with a Cleaver (hence his nickname)

The Butcher is an infamous boss-level demon from Diablo who used to terrorize players during the original run of the game, as a nod to this Blizzard brought The Butcher back in Diablo III as a boss and although not as difficult as before he was still a force to reckon with.

The Butcher is a unique and powerful Overlord demon who terrorized the townsfolk of Tristram with the aid of Lazarus, who would callously lead many townsfolk to the Butcher's liar where the monster would horrifically mutilate and kill them, hanging their bodies up much like a butcher would fresh meat.

This coupled with the Butcher's great power made him a greatly feared opponent but he was eventually slain, in the roleplaying game based on the video-game it is suggested he may of been a servant of Andariel.

The Butcher is summoned by the witch Maghda in Diablo III and becomes an Act Boss, necessary to complete the game. As such players have no option but to fight the monstrous demon as it attacks them on Maghda's behalf: like the original Butcher it views humans as a source of food and is extremely aggressive. 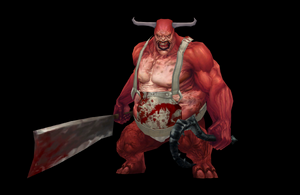 The Butcher in Diablo III. 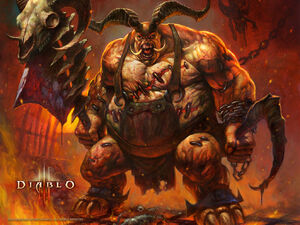 The Butcher returns.
Add a photo to this gallery

Retrieved from "https://villains.fandom.com/wiki/The_Butcher_(Diablo)?oldid=3851158"
Community content is available under CC-BY-SA unless otherwise noted.