The Butler of the Kou Family

Butler of the Kou family

Rob of the House of Kou's stuffs (briefly succeeded).

The Butler of the Kou Family (in Chinese: 寇府大管家), also known as The Housekeeper of the Kou family, is an antagonist in the 1986 adaptation series of the 16th-century Chinese classic novel Journey to the West by the late Wu Cheng'en. He is an exclusive character for the series, to give the arc a villain. Even though he appeared to be a trustworthy butler of the Kou family, he is actually a member of a gang of robbers who rob people of their stuffs.

He is portrayed by Chen Jian.

The Butler of the Kou family is, like his name suggests, an unnamed trusted butler of the Kou family, an aristocratic family near India, where Xuanzang's party arrived to. In secret, the butler is a member of a gang of robbers who attack, kill and kidnap people, as well as robbing their stuff. He also secretly commits adultery alongside Mrs. Kou, Mr. Kou's second and current wife.

When he and his gangs rob of Mr. Kou's money, Mr. Kou go out and tried to stop them, only for the traitorous butler to kill him after the old man discovered his real face. To avoid punishment, he framed Xuanzang's group about the murder and convinced the Kou family that the monks are the robbers. This led to Xuanzang, Sun Wukong, Zhu Bajie and Sha Wujing getting wrongfully imprisoned, tortured and beaten. However, Sun Wukong managed to clear their name.

Later on, when Wukong revives Mr. Kou, the butler quickly fleed to avoid punishment once again. When Mr. Kou's son told him to be back, unaware that he's a robber and the murderer, the butler even tried to kill him in secret, though Wukong managed to stop him using his magic. When Mr. Kou exposes him to be the murderer in front of everyone, he begs for forgiving only to be punished and imprisoned anyway. It is implied that he would be imprisoned, and possibly receive the same punishment that was originally falsely given to Xuanzang's party, perhaps even worse as he is the one who framed them in the first place.

Though at first seems to be polite and friendly, the butler is actually a murderous psychopath under his charismatic facade. While most of the Journey to the West villains are demons, whose culture requires kidnapping and eating humans (not to mention many demons were later redeemed, mostly if they're steeds or servants of the deities), the butler himself is just a normal human, fully capable of human moral agency, yet he committed heinous acts out of sadism and greed, even betrayed Mr. Kou, who had never abuse him (and even treated him very well for years), incriminated the good monks (who he apparently knew that they're carrying a great mission to receive the sutras) that never did anything to him, and manipulate the entire Kou family into believing him, just so he wouldn't have to suffer any punishment. In addition to this, the butler also committed adultery alongside Mrs. Kou, and the fact that he fleed alone without even thinking about her showing that he doesn't care about her either. In the last minutes, he begs Mr. Kou to forgive him, but that's clearly a fake apology to save his own skin rather than any actual remorse. 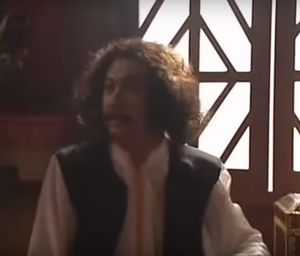 The Butler of the Kou family.
Add a photo to this gallery

Retrieved from "https://villains.fandom.com/wiki/The_Butler_of_the_Kou_family?oldid=3707456"
Community content is available under CC-BY-SA unless otherwise noted.