The Cabal is a major criminal organization turned demonic cult in Magic: the Gathering. While under the leader of the Cabal Patriarch (Virot Maglan), the Cabal's main goal is to achieve wealth and power by any means. But, after his death and Belzonlok took control, the organizations motives changed to rewriting Dominaria's history to allow Belzonlok to take the blame for every negative event in the planes history. It was ran like an extended family with all of the Cabal's members given secret names. These names (when said) can be used to control its members. This group is filled with clerics, wizards, and minions as well as controlling a mass of zombies, slaves, and nightmare creatures.

The Cabal was founded by Virot Maglan and it's main service was selling goods. The organization was successful because it manipulated the greed and fear within its patrons. Its most notorious business however was pit fighting. The Cabal would gather people and monsters from throughout the plane to fight to the death in the pits and eventually the Grand Coliseum. Anyone can enter the pits for money, fame, service to the Cabal, and just to settle debates. It became very popular after the "Phyrexian Invasion" due to the lower standard of living at the time. Virot Maglan had ruled the Cabal for a long time due to his immortality as well as his ability to kill anyone he touches. During the Odyssey block, he sought the Mirari, an artifact of great magical powers and can grant its users desires at the cost of the user's sanity. His minion, Braids, found it with the cephalids( a race of intelligent octopus people) and their Ambassador Laquatus and brought it back. The Patriarch kept it in his vault and forced a dementia mage named Chainer to use it when he or his allies needed it. This lasted until Chainer usurped Maglan and became the new leader of the Cabal. During Chainer's rule, he used his rule to create numerous nightmare beasts. His overuse of the Mirari would get the best of him when his nightmares turned on him and lead to his demise and the Mirari was taken.

During the Onslaught block, Braids brought Maglan to Aphetto to return him to power and to aid in the construction of the Grand Coliseum. Braids brought the Patriarch a wounded warrior named Jeska that she found in the woods. He attempted to use his killing touch to kill Jeska, but accidentally created Phage in the process. The Patriarch fell in love with Phage and gave her a lot of power in the Cabal. He eventually found Phage as a threat and attempted to kill her on numerous occasions. He thought he would finally slay her after rearing their son, but Braid's killed him with a nightmare monster. Now that Phage is in charge, she sought to kill the Illusionist, Ixidor, who sent an army to kill he because she murdered his lover. She killed Ixidor with a death wurm. Ixidor's creation, Akroma, Angle of Wrath, formed a religion to combat Phage and the forces of the Cabal and the two forces squared off. Phage and Akroma fought each other until Phage's brother, Kamahl, used a scythe to try to kill Akroma, but killed both Phage and Akroma. Now, Braids is the leader of the Cabal and Karona is born. The Cabal wanted Karona as an attraction that people would pay to see. But many of its members became insane due to the Mirari and were either killed or trapped in a dementia mage's mental space.

After many years, the Cabal attempted a ritual to summon Kuberr, but accidentally summoned the demon Belzonlok instead. With his arrival, the Cabal transformed from a crime syndicate to a demon cult. Belzonlok's goal was to rewrite the history of Dominaria and name Belzonlok as the perpetrator of all negative events on the plane. One of the group's missions was to retrieve the Blackblade Reforged, but it was stolen by the crew of the Weatherlight. Later on the story, the Weatherlight Crew and the Cabal clashed for a final time. It was revealed that the Cabal conscripted Yargle, a giant ghost frog, and Urgoros, a shade, to aid them, but they were defeated. Eventually, the Gatewatch infiltrated the Cabal's base and killed Belzonlok with the Blackblade. The fate of the Cabal is unknown. 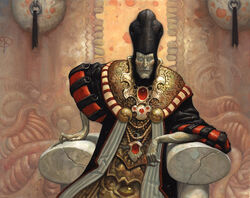 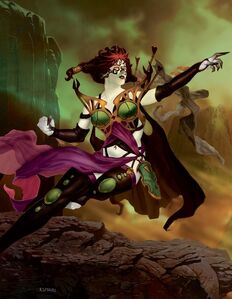 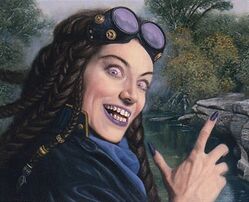 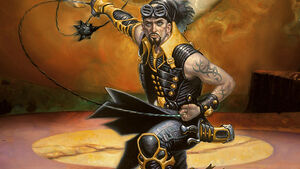 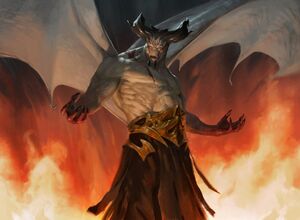 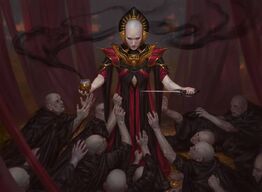 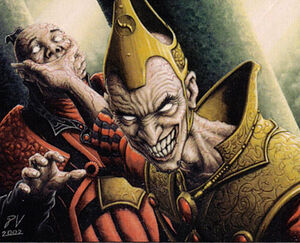 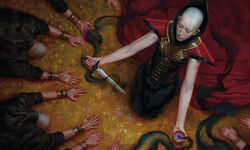 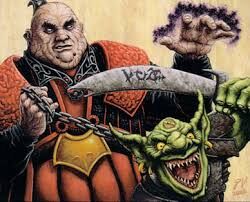 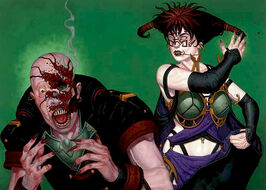 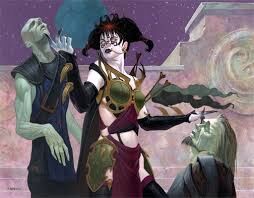 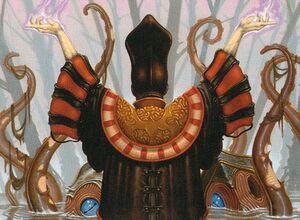 Retrieved from "https://villains.fandom.com/wiki/The_Cabal?oldid=3553669"
Community content is available under CC-BY-SA unless otherwise noted.