The Chairman (The Ghost and Molly McGee)

The Ghost and Molly McGee

Ruler of the Ghost Realm

Leader of the Ghost Council (both formerly)
Grim Reaper (possibly)

Have Scratch punished for failing to spread misery.
Have the entire world full of misery (all failed).

The Chairman is, of all the ghosts that exist in the series, the most that resemble a spirit, instead of being made of ectoplasm like the others, his hands are actually made from bones, and his face closely resembles a skull.

He is the tallest of all the ghosts that have appeared so far.

The Chairman believes that it is a ghost's duty to cause as much misery in the human world as possible, and will punish any ghost that does not live up to his standards.

He is very emotionless, as he always remains his whole time at the Council table waiting for more ghosts to check their performance. He is mostly silent in the entire series so far, as he only speaks in grunts and noises.

Very little is known about The Chairman, except that he, along with the Ghost Council, have been punishing ghosts that have failed to spread misery on the Human World for an unknown amount of time, by sending them to the Flow of Failed Phantoms.

He is the most feared in the Ghost World for obvious reasons.

The Ghost and Molly McGee

The Chairman first appeared, along with the Ghost Council, while punishing one of the ghosts, a pink ghost, for allowing her town to become too joyful. Her excuse that she couldn't compete with a dog rescue wasn't enough, and she was sent to the Flow of Failed Phantoms.

He and the Ghost Council then summoned Scratch, in which they deemed him 'adequate' for keeping Brighton's misery levels high.

At the end of the first episode, unbeknownst to Scratch, the Chairman notices that Brighton's misery has slightly gone down.

The (Un)natural and The Turnip Twist

He briefly appears in both episodes along with the Ghost Council, but he is seen as a background character in both.

At the end of "The Turnip Twist", he and the Council are not pleased by the Brighton's misery levels decreasing.

He appears again along with the Ghost Council, where he gives his approval to the council's decision to promote Scratch by doing a thumbs-up signal, he later seems to be weirded because of Scratch incapability to say "yes".

He does not appear physically, but he is briefly seen along with the Council sending Scratch to the Flow of Failed Phantoms in his imagination sequence using the puzzle pieces.

He is seen in the middle of punishing a green ghost along with the Council until they are interrupted by Scratch.

He first appears in the background of the Council location as always, until the Council notice Scratch's food and then go to Earth to eat it, scaring away all the other ghosts that were there. However the Chairman, as in his world, does not eat or do anything, just remaining still in the table, with Scratch even questioning that, much to his own annoyance.

Later, the Council depart from Earth back to the Ghost World, with the Council praising the food that they just ate.

He is seen as the "special ghost guest" of the Scaring Seminar, he evaluates the scaring abilities of some of the ghosts, even sending a pink ghost to the Flow of Failed Phantoms.

Scratch was almost sent to the Flow of Failed Phantoms but ended up being saved by Geoff, and even gives his approval to the "Special Scare Method" from Scratch.

Molly vs. The Ghost World

The Chairman in one of the earlier conceptual arts of the show, his design here resembles even more to that of the Grim Reaper 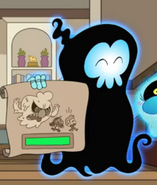 The Chairman as he appears in "Chiby Tiny Tales"