One of the greatest military powers of the world

Great influence in economics, and education and other humanitarian services
Deception and propaganda
Powerful military composed of both men and machines
Hugely advanced and sophisticated technology ahead of its time

Win the The Great World War.

The Chancellor's Party was a political party that emerged probably in 1940, the same year that World War II happened in real life; however, in the universe of 9, the party was founded during The Great World War, indicating a divergent history in the 9 universe to real life.

The party itself was a powerful political party that emerged in the Chancellor's Nation, quickly becoming one of the greatest military powers of the world, and it influenced the technology, economics, and education and other humanitarian services. To summarise the history of the party, it had almost the same story of how Nazism arose in Germany; raising a defeated nation to a prosperous but extremely intolerant and tyrannical super world power.

As part of the Chancellor's thirst for war and world domination, he had the Scientist build the Fabrication Machine for him; under the false promise that it would be an instrument of progress and creation, when the Chancellor actually schemed to use it to build war machines to conquer the rest of the world. After the Chancellor's party took the Fabrication Machine away and had it installed as the Nation's primary war machine manufacturer, they declared war, with the largest army in the world at their hands, consisting of both humans and machines. The Chancellor's Nation's army first butchered their enemy on the battlefield with the Steel Behemoths, before the machines turned on the Nation and humanity when the Fabrication Machine went insane. The machines became a public menace, destroying and massacring all human life they came across, be it humans of the Chancellor's Nation or of any other nationality, and eventually succeeding in bringing about the end of humanity and almost all life on Earth.

With humanity eradicated, the Chancellor's party was effectively disbanded and gone.

The emblem represents the Chancellor's Nation; it has three pointy edges at the top, and at the midpoint is greater between the other two. The symbol is black and has a triangle around it, a circle at the bottom where the center circle is red. The symbol is surrounded by red color. The Nation's emblem's design and colours closely mirror those of the swastika emblem used by the Nazi party; a party which the Chancellor's party bears many similarities to.

The emblem was widely spread throughout the Nation, mostly in banners on building walls, in propaganda posters of the Chancellor, and even in the Scientist's Nation lab when he was constructing the B.R.A.I.N. The Steel Behemoths created by the Fabrication Machine before its extermination of all life also had the emblem on the sides of their head casings, and the tarp which acted as the Winged Beast's wings had the emblem on it. 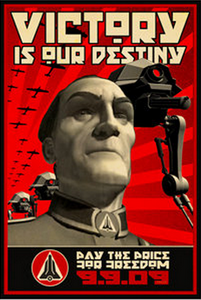 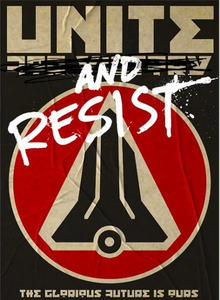 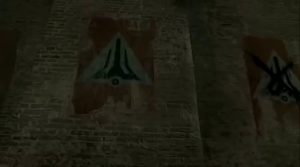 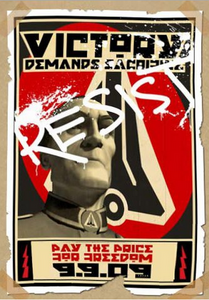 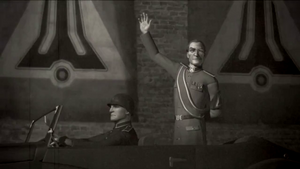 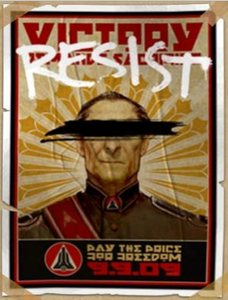 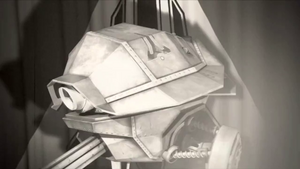 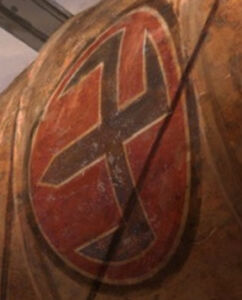 Retrieved from "https://villains.fandom.com/wiki/The_Chancellor%27s_Party?oldid=3892214"
Community content is available under CC-BY-SA unless otherwise noted.