The Chicken from Outer Space

The Chicken from Outer Space

Alien Chicken
The Chicken from Outer Space is an alien chicken and is the first antagonist in Courage the Cowardly Dog.

A huge flying saucer descends from the heavens, bringing an evil alien bent on visiting chicken havoc to the humble home. The Space Chicken lays an egg that Eustace eats that turns him into an evil chicken.

The chicken appears later as a headless, featherless brown chicken wearing blue wellington boots. The Space Chicken looks drastically changed from his first appearance, telling Courage that he was zapped with his own laser weapon and lost his head and feathers. He gains Eustace's head, voice, and personality. The Chicken was killed for good when he was destroyed along with his ship by rocket.

The chicken revealed to have a wife and a three-head son, the mother tasking them to kill Courage to avenge their father since Courage accidentally causing their father's death. 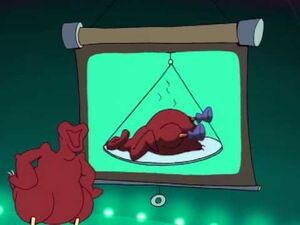