The Circle is an extremist arm of the Church of Unitology led by Jacob Danik. A militant Unitologist group of religious extremists, the Circle was actively deposing Earth Government authority throughout the galaxy in the name of "freeing" the Markers from Human control.

According to one of Danik's logs, the Circle has membership that numbers in the millions. It isn't clear if there are any remaining Unitologists who do not belong to the Circle as of 2514. Members of the Circle are fiercely fanatic, zealous in their loyalty to both the Church and their leader.

The Circle is shown to possess considerable resources, its members are well armed and equipped and command a small fleet of dropships which facilitate their propagation against EarthGov.

Most members of the Circle adorn their apparel with Marker Symbols in an apparent show of their dedication to the message of the Marker and Unitology. Circle members encountered by Isaac Clarke do not appear to possess proficient combat training - only basic training, as they are slow to aim, stand tall in the middle of firefights, and do not use cover effectively. Often, they will attempt to hide behind something but still leave a parts of their body visible or leave cover in the middle of combat. Other times they will abandon cover completely to fire on their opponent.

Circle Soldiers commit ritualistic suicide like other Unitology members in previous Dead Space games, by slitting their throats, rather than stabbing themselves in the forehead. In combat, soldiers will run up to an opponent with armed grenades in a suicide attack that result in devastating damage to their surrounding environment[1]. On one occasion, a member turned a shotgun on himself while screaming "One Mind, One Body" before pulling the trigger.

Tau Volantis Danik and members of the Circle under his command are led to the planet of Tau Volantis by Captain Robert Norton of the Earth Defense Force, in the hopes of killing Isaac Clarke; the "Marker Killer" who's continued resistance against the efforts of the Unitologists to bring about "Convergence"[4]. As well as seeing the incomplete Convergence Event of the planet completed with the Codex once Danik learns of the nature the device Ellie Langford is searching for.

The forces deployed on the planet are numerous, yet despite the dwindling number of survivors opposing them, they are unable to stop Isaac and John Carver from reaching the Alien Machine.

In the aftermath of witnessing the Convergence Event and losing Danik, the faith of the Circle members deployed to Tau Volantis is shaken, with several members finally embracing the futility of believing in Unitology. However, those who remain dedicated to their beliefs eventually give rise to a new Unitologist Cult, dedicated to worshipping the Brethren Moons. The status of the millions of other members is unknown, with the lack of information on the rest of EarthGov colonies, and the Brethren Moon invasion. 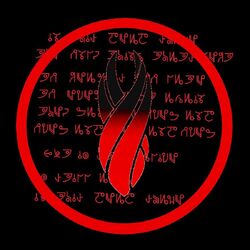 Retrieved from "https://villains.fandom.com/wiki/The_Circle_(Dead_Space)?oldid=3807478"
Community content is available under CC-BY-SA unless otherwise noted.