To achieve immortality and power.

The Circle is a major group of antagonists in the SpellForce videogame series. Although most of them do not appear in the main game SpellForce: The Order of Dawn, their influence can be heavily felt in the world. They appear in person in SpellForce: Shadow of the Phoenix where they serve Hokan Ashir.

The Circle was formed by the thirteen most powerful wizards and sorcerers of Eo, no matter whether they belonged to the light or dark races. Initially, their intentions were noble, they wanted to gather and research knowledge to help the people of Eo. They mostly did not act directly but through messengers or through proxys, leaving most of the people unaware that the cause of history was in truth led by the Circle. Due to their immense magical powers, the Circle eventually found a way to prolong their life over the mortal span, allowing them to live far beyond their years. As no one who was not a Circle Mage was powerful enough to harm one of the mages, the Circle Mages were basically immortal. They took their seat in Mulandir, where no king or government could influence their work.

Eventually, the Circle uncovered ways to bind people's souls to runes. With these runes, they were able to control the bound people, giving them power over them. If a Rune Warrior was killed, he could be simply resurrected at a Rune Monument, gaining the Circle the power over powerful fighters who could be resurrected over and over again. Even if the Rune Warriors did not like their orders, their binding to the rune forced them to follow their orders nonetheless. By some means, the Circle also forced the Phoenix, a being of pure Allfire, into a prison known as Phoenix Stone.

After years of research, the Circle found out that in the near future, a celestial body would travel between the star known as 'Aonir's Eye' and Eo and in that short time period, the influence of the gods would not reach Eo. During this brief period of time, called convocation, the Circle Mages intended to call forth the basic energies hidden deep inside the earth which were normally sealed by the gods. By using these energies, the Circle intended to become even more powerful than they already were.

However, eventually the Circle Mages succumbed to the temptation of power. No longer a union, each member of the Circle attempted to further his own goals. Clashes erupted between the mages, the most notable being the feud between Hokan Ashir and Uram the Red. Both men sent their armies against each other, completely annihilating a large part of Nortander which was then renamed "The Drablands". The battle between the Circle Mages also affected the general population of Eo, many falling to the armies roaming the lands.

Eventually, the time of the convocation drew near. Each member made special preparations in their attempt to harness the power of the gods. However, as they did no longer worked together and all attempted to harness the power of the convocation individually, none of the Circle Mages was strong enough to cope with the amount of power unleashed. All Circle Mages that attempted to use the convocation were killed in the process and the unrestrained powers ripped apart the entire continent, unleashing the fires from within the earth and causing a horrible catastrophe. Hundreds of thousands of people died in the resulting cataclysm. However, not the entire continent was destroyed. The places where statues for Aonir had been erected were spared, creating hundreds of small isles in the thundering element sea.

In the following eight years, the sole surviving Circle Mage Rohen, who had not attempted to harness the power of the gods, travelled to all islands that were created during the convocation and connected them with portals. He made no destinction between good and bad races, he allowed all of them to be connected by portals.

In the eighth year after the convocation, Rohen was killed by his younger self. However, months before his death Rohen had secretly called forth a last Rune Warrior and had handed him his own rune, allowing the Rune Warrior to make his own decisions and to choose his own fate.

When the Rune Warrior intended to stop the horde of beings known as Iron Blades, who were invading Eo, he travelled to Whisper where the Circle Mage Hokan Ashir, the creator of the Blades, lay burried. After negotiating with Hokan's spirit and delivering him the Mask of Belial, the spirit was seemingly released from his hold on earth and disappeared, not before giving the Rune Warrior pivotal information on the Iron Blades.

With the death of Ulather, the demon hordes that remained on Eo after the death of their leader, the Circle Mage Uram, disappeared from the surface of Eo as well. Other armies, particularly the undead forces of Hokan and Hokan's Iron Blades, were destroyed as well.

SpellForce: Shadow of the Phoenix

In SpellForce: Shadow of the Phoenix, it is revealed that by giving Hokan's spirit the Mask of Belial, the Rune Warrior did not free Hokan's spirit but gave him the means to resurrect. Hokan returned and started searching for the graves of the former Circle Mages, reviving all of them with a potion made from the blood of the god Ereon. The potion put the Circle Mages under Hokan's spell, who left Nortander with them and returned to the continent of his birth, Xu.

At Xu, Hokan used his influence over a Rune Warrior (the protagonist from SpellForce:Breath of Winter) to travel to the City of Souls, where he tasked the Rune Warrior to bring him the ashes from the crypt located in the middle of the city. After the Rune Warrior, who was not aware whose ashes he was carrying, returned to Hokan with the ashes, Hokan used his potion on it to revive Raith Skaddar, former Circle Mage. With Raith, Hokan returned to his hideout, the Bone Temple deep in the black jungle of Xu.

However, Hokan is followed by the two protagonists of the previous games, both Rune Warriors. The two men manage to reach the Black Jungle, slaying the revived Circle Mage Rohen Tahir on the journey who had been sent by Hokan to stop them. Reaching the Bone Temple, the Rune Warriors realized that Hokan was forcing the Circle Mages to perform a ritual. With the combined forces of the Circle and the powers of the Mask of Belial, Hokan intended to turn himself into Belial, the God of Death. However, the Rune Warriors disrupted the ritual and while Hokan managed to transform into Belial, he did not gain its full powers. When the fight seemed all but lost, the Rune Warriors unleashed the ancient artifact known as the Phoenix Stone. Fueled by its hate for the Circle, the Phoenix attacked the Circle Mages and Hokan, who had transformed back into his human self. Using the allfire, the Phoenix destroyed all twelve mages and completely annihilated their remains, ending the Circle for good.

The Circle consisted of thirteen mages. 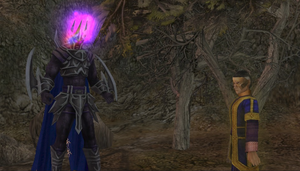 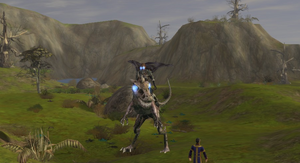 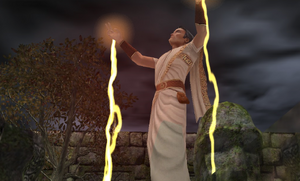 Silverhand performs a ritual to turn Hokan into Belial
Add a photo to this gallery
Retrieved from "https://villains.fandom.com/wiki/The_Circle_(SpellForce)?oldid=2457736"
Community content is available under CC-BY-SA unless otherwise noted.