Manipulate people across the galaxy.
Manipulate The Mandalorian.
Commanding his men.

Hire The Mandalorian and use him and the bounty he offered him in order to hunt down and later kill the Child (ongoing).
Make more profits and business deals with other life forms in the galaxy or kill them (failed).
Maintain his power as much as he can (ongoing).
Survive the Imperial downfall at the hands of the Jedi and the Rebels.
Find shelter to protect himself and to rise to new power (both succeeded).

The Client is the secondary antagonist of the first season of the Disney+ live-action Star Wars television series The Mandolorian.

He is a mysterious powerful human businessman who is associated with the last remaining parts of the Galactic Empire, which hires The Mandalorian in order to hunt down a Yoda-like baby codenamed as "The Child" in exchange for heavy sums of Beskar. However, The Mandalorian had changed his mind on the bounty and became bonded with The Child, thus, causing a series of major conflicts with The Client.

He was portrayed by Werner Herzog, who also portrayed The Zec in Jack Reacher.

The human who would later be known as The Client is coming from an unknown origin, yet, it is known that following the major downfall of the Galactic Empire at the hands of the redeemed now-deceased Darth Vader, his son Luke Skywalker and the Rebel Alliance, he and his men became associated with the last remnants of the Empire and became resided on an unknown planet and rose to new power as a powerful businessmen and crime lord.

The Client had become associated with Imperial scientist Doctor Pershing which had come to assist him in technological or scientific matters, and, he is the one to offer him to hire The Mandalorian.

Greef Karga, head of the Bounty Hunters' Guild, was informed of the job being available, although rather than the traditional puck and chain code being provided, the Client wished to meet the hunter who accepted the job face to face. Many bounty hunters from the Guild accepted the job. Karga later informed the bounty hunter known as "the Mandalorian" of the job after he turned in his previous bounties, which he accepted. The guild master then contacted the Client to let him know the Mandalorian was coming to meet him, describing the hunter as the best in the parsec, but also expensive.

The Mandalorian successfully returned with the Child and delivered it directly to the Client. The Client then produced the promised camtono of beskar and handed it over to the Mandalorian. Before he left, the Mandalorian asked what the Client planned to do with the child, but the Imperial refused to say, stating that per Guild tradition the transaction was now over and so should be forgotten.

With the Mandalorian gone, the Client and Pershing argued over the Child. The Client told Pershing to simply extract what they needed from the Child, killing it if necessary, but the doctor refused, stating he had specific orders to deliver the baby alive. The Client then simply told him to hurry, as he could no longer promise that Pershing would be kept safe, and left. The Client's warning proved true, as the Mandalorian returned shortly afterward and rescued the Child from Pershing, but spared the doctor.

Greef Karga and Cara Dune arrived with the Mandalorian in custody alongside the empty pram for the Child in the Nevarro cantina, presenting them to the Client. While seated, he questioned why Mandalore resisted Imperial rule, claiming that the Empire brought forth justice to every system it conquered. He then asked the Mandalorian if peace had truly been restored after the revolution and stated that it only resulted in death and chaos. Before the Client could see the Child he was then interrupted by a call from his superior, Moff Gideon, who asked him if the Child was secured. The Client confirmed that he was in their hands, but Gideon told him to recheck the pram. Gideon's forces then immediately opened fire on the cantina, killing him instantly.

The Client is a man to be known in the galaxy to be shrouded by great mystery, thus making his personality nearly mysterious. However, he is known to be an extremely powerful, ruthless, cold, dark and often destructive individual but mostly he is a cold-blooded and cool individual.

He is a powerful key figure in the world of galactic business, even though what he is doing is completely illegal, and, using his resources, his wealth and his men for means to be rich and to maintain his power, implying he is greedy as well. The Client appeared to be very calm while the Mandalorian and Stormtroopers drew arms in his presence and were willing to have his men lower their weapons first.

Despite having previously agreed with Pershing that they would require the asset to be delivered alive, he offered the Mandalorian the alternative of termination and claimed to be being pragmatic when Pershing complained.

Soon as The Mandalorian had left the area, The Client had stated he was completely pleased to see how the Beskar was restored to its original owner, as he believed things needed to be returned to order after the recent period of what he referred to as disarray.

The Client's cruel ruthlessness is proven to be existing soon as he was requesting The Mandalorian to bring him The Child so Pershing can kill him and make profits, presumably from the Child's death. When the Mandalorian refused to the job, it has opened a somewhat series of conflicts between him and the Client, including his men.

Additionally, The Client despite being associated with what is left from The Empire is completely not showing any kind of signs to continue adoring the Empire. 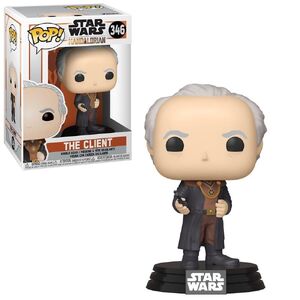